Print
Do you need a speaker to empower your people? Leigh Woodgate is an inspiring, honest goal-orientated speaker… a fearless horsewoman who grew up just down the road from the Snowy, who beat the men at their own game. They breed them tough in those mountains, and Leigh Woodgate’s experiences have been epic. 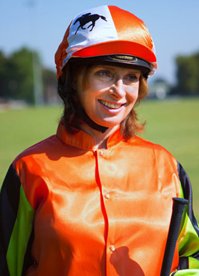 Leigh is a fine example of a woman who has risen above her hurdles, and fearlessly steps forward. I certainly recommend her as a unique speaker with a compelling story.

Leigh’s story is one of extraordinary courage, determination and hope. Every man, woman and child in the room was deeply moved by her journey and we were all left inspired to make the most of our dreams and ready to tackle the insurmountable.

I strongly recommend Leigh Woodgate as a powerful motivational and inspirational speaker whose story is relevant to all age groups.

Leigh Woodgate travels from VIC
Fee Range: Up to $5000

Do you need a speaker to empower your people? Leigh Woodgate is an inspiring, honest goal-orientated speaker… a fearless horsewoman who grew up just down the road from the Snowy, who beat the men at their own game. They breed them tough in those mountains, and Leigh Woodgate’s experiences have been epic.

Growing up, riding was Leigh’s life. She was a natural rider and from a young age developed into a champion; a proud and proficient professional jockey. One race changed all that. Leigh had a horrific fall, broadcast on national TV. With the racing world watching and fearing the worst, she survived. It took her 15 years however to repair her shattered body and mind - 15 years of perseverance and dedication - to get back on the horse.

Leigh’s spent the last 8 years riding track work as well as sharing her story with corporate and community audiences. She’s harnessed this experience to share her story and inspire audiences around the world.

The story of the only woman ever to win the Great Mountain Race at Mansfield, as well as countless other awards and accolades as a professional rider is one of determination. The accident changed the course of her life forever.

At the 2nd last jump her horse stumbled and I fell off. The rest of the field was unable to avoid her body on the track. The resultant injuries were almost fatal; hardly a bone in her body was left unbroken.

Leigh lay in a coma for 17 days, then in hospital for 6 months. The whole time she believed passionately that she would ride again. She had to learn how to eat, talk and walk again. Step by step, Leigh strengthened her body and her resolve.

She’s received great support overcoming profound hurdles. 15 years after her accident, she finally received clearance from doctors to ride again, and she does so professionally 2 mornings a week for the trainer Eric Musgrove. In 2012 Leigh was recognized as the National Jockeys’ Celebration Day Ambassador and was featured in an episode-long story on Australian Story.

Do your people hesitate at hurdles? Do they struggle to get back on the horse after setbacks? I might just have the story and the old-fashioned pigheadedness to help them overcome anything!

Leigh’s will and determination to get back on the horse has got her through daunting adversity, and she believes she can inspire others to overcome the obstacles they come up against in their own lives.

Leigh Woodgate’s 7 Steps to Overcoming Anything

The Woman from Snowy River