Print
Emerging talent and magician Liam Power is a wonderful entertainer guaranteed to captivate and engage your audience. Liam’s energy, engagement and entertaining magic act will be the highlight of your event! 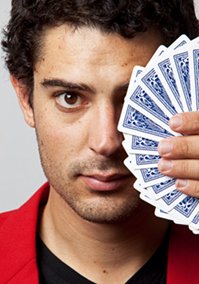 “I see a lot of entertainers and Liam is a stand out, engaging, funny, and his magic is first class”

"Truly from another time or world - Power captivates and mesmerises his audience with unfathomable magical illusions that keep you guessing long after the show. We always find a reason to have Liam perform at one of our gigs as he is always without doubt the biggest highlight of the event. Not only that, he is also devilishly charming."

Liam Power travels from NSW
Fee Range: Up to $5000

Magic can seduce you anywhere. It happened to Liam in Thailand when he was just 16 and on holiday with his family. He fell under the spell of an American master who had the village roaring with disbelief. Liam was hooked.

Now many years later Liam finds himself travelling nationally and internationally leaving crowds spellbound wherever he goes. He has performed on national TV including The Morning Show and Studio 10 as well teaming up with The Fred Hollows Foundation to film a short documentary in Cambodia. Liam was also Speaker at TEDx UNSW in 2016. His list of Festival performances Include Woodford Folk Festival, Falls Music & Arts Festival, The Bello Winter music Festival, Adelaide fringe, SOLD OUT shows at Sydney Fringe & Melbourne Magic Festival and he was the Magician In Residence at the inaugural Lost Lands Festival.

A regular on the corporate entertainment scene, companies such as CBA, Ernst & Young, IBM & Macquarie bank just to name a few and all trusted Liam to make their events special, memorable and magical. Arnotts, Benefit cosmetics and Thai Airways and many others have commissioned Liam to come up with custom tricks to highlight a product or message.

With more than 15 years of performing experience under his belt and performances in a variety of situations and venues, including; television, corporate events, luxury cruise ships, weddings, private parties, as well as performing magic over the airways on ABC radio, Liam has the experience required to make your event a roaring success.

Looking for a fun, unique and practical team building idea, why not a Magic Workshop? A magic work shop not only gets people working together but improves their presentation & communication skills, uses a great mix of intellectual and physical skills and every person leaves with some cool party tricks.

for shorter or longer) and participants will learn to:

• Get someone to pick a card and you find it

• Learn a bet where you are guaranteed to win every time

• Learn how to make someone pick a certain card

• Make a glass of liquid appear from your sleeve and more

It's also possible with some notice to customize some of the tricks I teach your employees so that they help with a specific task. e.g. sales. Participants will also get a deck of cards and notes to keep.