Print
Luke McGregor started his stand up comedy career in Tasmania in 2007 when he entered the raw comedy competition after one of the contestants didn’t show up. In 2008 he was selected as a Raw Comedy national finalist. 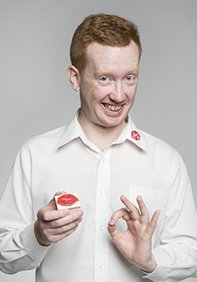 Luke McGregor started his stand up comedy career in Tasmania in 2007 when he entered the raw comedy competition after one of the contestants didn’t show up. In 2008 he was selected as a Raw Comedy national finalist.

Some comedians deliberately adopt an awkward persona when performing as a kind of mask to hide their insecurities, but when Luke McGregor takes to the stage, there’s no doubting he’s genuinely terrified. He stumbles over words, fails to hide micro-winces and occasionally drifts into a deer-in-the-headlights expression. Despite (or perhaps because of) this, the openly dorky Tasmanian is one of the most exciting comics in Australia today.

Luke was a regular performer and writer for three seasons on Channel 31’s Studio A. He has written on various TV projects including Legally Brown, It’s A Date 2 & Our Watch – Christmas Campaign.

In 2013 Luke’s first solo Melbourne International Comedy Festival Show ‘My Soul Mate Is Out Of My League’ played to sold out rooms and won the prestigious Best Newcomer Award. He then went on to perform a hugely successful season at London’s Soho Theatre.

Luke co-starred in the feature film Border Protection Squad with Peter Helliar, Ryan Shelton, Dave Hughes and Lachy Hulme and on television, Luke has appeared in Legally Brown series 2 (SBS), Time Of Our Lives series 1 & 2 (ABC1), Josh Thomas' Please Like Me (ABC/Pivot), and the telemovie Scumbus. His ‘ginger wonderland’ date with Sibylla Budd in It’s A Date (ABC1) stole the show, and he garnered cult figure status amongst the celebrities lucky enough to be interviewed by him on Dirty Laundry (ABC2). Luke has also appeared on The Project as a correspondent, This Week Live, Spicks & Specks, series 2 and 3 of the web series Noirhouse, and Utopia on ABC. In 2015 Luke appeared in the feature film Now Add Honey, and reprised his role of ‘Hugh’ in Utopia – Series 2.

Luke performed his solo show 'I Worry That I Worry Too Much’ at the 2014 Melbourne International Comedy Festival. Luke had no need for undue ‘worry’ as he was moved to a bigger venue. Two thumbs up Mr McGregor!

This year, Luke presented Luke Warm Sex (ABC), a show that took an embarrassingly honest and humorous look at all things sex. Luke has also teamed up with Celia Pacquola for Rosehaven (ABC), a new comedy series filming in Tasmania which they have written and are performing the lead roles in.