Print
Maggie Beer and Colin moved to South Australia's Barossa Valley in 1973 and began farming pheasants on their new property near Nuriootpa that same year. In 1979 Colin was awarded a Churchill Fellowship to study game bird breeding in Europe... 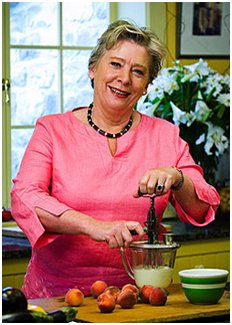 Maggie Beer and Colin moved to South Australia's Barossa Valley in 1973 and began farming pheasants on their new property near Nuriootpa that same year. In 1979 Colin was awarded a Churchill Fellowship to study game bird breeding in Europe and America and following their return to the Valley, they opened a farm shop to sell the game birds they were breeding.


This humble shop soon grew into the famed Pheasant Farm Restaurant and was destined to win numerous awards, culminating in the Remy Martin Australian Gourmet Traveller National Best Restaurant in 1991. After 15 busy years Maggie and Colin decided to close the restaurant in 1993 and focus on production of their expanding range of gourmet foods, starting with their signature Pheasant Farm Pate - always a favourite with restaurant regulars and in growing demand from gourmet food outlets around the country.
In 1997 the Premier of South Australia, John Olsen, opened Maggie's next venture, Maggie Beer's Export Kitchen in Tanunda. A state-of-the-art facility, the Kitchen was purpose-built for the production of preservative-free gourmet foods for the national and international market. The range of products soon expanded and now numbers over 20, including meat and vegetarian pates, olive oil, verjuice, preserves, condiments and desserts.
The Pheasant Farm was never far from Maggie and Colin's hearts however, and in 1999 they returned to both the site and the original concept of the farm shop, re-opening the premises as Maggie Beer's Farm Shop. The Farm Shop now opens every day and is the only location anywhere to have the full product range available for tastings and sales. Maggie Beer's Farm Shop also offers light lunches, coffee and wine sales from Beer Brothers and Pheasant Farm wines - labels that mark Colin and Maggie's 25 years as grape growers.
Maggie Beer Products has built its reputation on Maggie's own philosophy of using the best ingredients, in season, without preservatives or fillers. Maggie Beer Products aims to produce the best niche market gourmet products for the national and international market. Alongside the production facility, Maggie Beer Products also aims to play an active role in the growth of value-added food production in South Australia and Australia by facilitating the exchange of ideas and information between food growers, producers and consumers.
Maggie doesn’t cook by recipe, and describes herself as an instinctive cook “ I cook by feel and react to the produce I have to work with, although I do use the traditions of regional Mediterranean countries because I live in a Mediterranean climate here in the Barossa”. Out of all the products Maggie produces, she is most proud of the pheasant farm pate, it’s the flagship product. In recent times ‘Verjuice’ is the product she is most passionate about, even writing a book on it.
Maggie Beer has published five books, such as Maggie’s Farm, Maggie’s Orchard, Maggie’s table and most recently Maggie’s Harvest.
Subscribe
© 2022 Platinum Speakers