Print
John Cantwell retired from the Australian Army in early 2012 after a unique career spanning almost 40 years. Starting as a private soldier he rose through the ranks to become a Major-General. Along the way he held and excelled in a diverse... 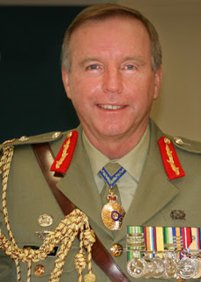 John Cantwell retired from the Australian Army in early 2012 after a unique career spanning almost 40 years. Starting as a private soldier he rose through the ranks to become a Major-General. Along the way he held and excelled in a diverse range of command and senior management appointments, including Commanding Officer of the Royal Military College at Duntroon, Commander of the 1st Brigade comprising combat units totalling 3000 troops, Deputy Chief of the Army, and most recently he was the Commander of all Australian forces in Afghanistan and the wider Middle East area of operations.


When not in command appointments, Cantwell acquired a diverse skill set in other key areas of Defence including training, personnel management and capability development. He led multiple reviews across domains as varied as national munitions stocks, force readiness, amphibious operations and submarine warfare. He headed delegations representing the Australian Defence Force in a host of international fora in the United States, Europe, the Middle East and the Pacific rim.

His experiences go well beyond the normal run of military appointments. In 2008 he was appointed by the Chief of the Defence Force to head the Force Structure Review which was at the heart of the current Defence White Paper, and which defined the structure and capabilities of the Australian Defence Force for the next 20 years.

In 2009 he was appointed interim Head (and later, Chief of Operations) of the Victoria Bushfire Reconstruction and Recovery Authority, a role in which he coordinated all Commonwealth, State and non-government efforts to recover from the deadly Black Saturday fires. The Premier of Victoria characterised Cantwell as 'a hands-on tireless leader and organiser with a remarkable ability to gain the respect and cooperation of disparate groups.' The Prime Minister described Cantwell as a leader possessing 'exceptional skills in coordination, guidance and organisation.'

Cantwell served in three distinct wars: combat duty in Operation Desert Storm in 1991; as the Director of Strategic Operations of the Multi National Forces in Iraq in 2006 (for which he was awarded the United States Legion of Merit); and as the Commander of Australian forces in the Middle East in 2010. For his service in the latter role he was awarded the Distinguished Service Cross for his 'inspired leadership, deep commitment to his people and superior performance on operations.' He has been made a Member of the Order of Australia (AM, 1990) and an Officer of the Order of Australia (AO, 2007), in addition to two Commendations for superior performance.

Major-General Cantwell is a skilled and engaging public speaker. His compelling interview for the Four Corner's television program A Careful War in 2010 dealing with the conflict in Afghanistan won wide praise. He lectures on command, leadership and crisis management to a variety of defence, business and academic audiences. He sits on the Advisory Board of an international defence-related company and provides one on one mentoring to senior executives. His book Exit Wounds: One Australian's War On Terror was published in October 2012.
Subscribe
© 2022 Platinum Speakers