Mariam Mohammed  is a speaker, facilitator, entrepreneur and coach. Mariam co-founded MoneyGirl – a social enterprise delivering financial literacy to young women.  She  speaks about the importance of intersectionality (Diversity and Inclusion) in organisational strategy, strength-based community building and stakeholder engagement. 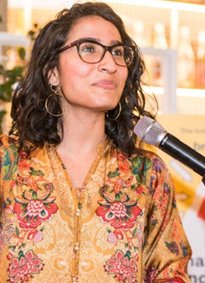 "Mariam Mohammed was an amazing choice for speakers for this event. She was completely unexpected and so different from our usual speakers for these things. As someone who thinks our feminism MUST be intersectional, it was SO refreshing to have someone stand up at one of our events and say this. I imagine that for many of our staff from a diverse background it also means a lot to them as well."

"Mariam Mohammed was an excellent speaker. Wow! I hadn't heard of her before. She brought up interesting points and is very inspirational. Great choice of guest speaker (and there are so many to choose from)."

Mariam Mohammed is a Pakistani-Australian woman. She is a speaker, facilitator, entrepreneur and coach. Mariam co-founded MoneyGirl – a social enterprise delivering financial literacy to young women.

Now, she speaks at events and organisations about the importance of intersectionality (Diversity and Inclusion) in organisational strategy, strength-based community building and stakeholder engagement. She has been recognised by the Financial Review as one of Australia’s 100 Women of Influence, and by the State as a 2020 NSW Young Woman of the Year Finalist.

MoneyGirl was founded in early 2019 when Mariam Mohammed and Mellisa Ma discovered a need for financial education targeted at young women embarking on their new careers. After finishing their university studies, they realised there was very little support for women who wish to become financially literate and take control of their money.

In fact, there wasn’t really any financial information out there that was relatable to the young working woman. Sick of bland and overly generic financial information, they created MoneyGirl to help women take control of their finances and create a supportive community in the process.

MoneyGirl designs and delivers financial literacy workshops on specific topics. Each topic is chosen carefully with a focus on improving women’s personal finances.

Born and raised in Karachi, Pakistan, Mariam had never been outside the city when she moved to Australia in 2013. ‘As a survivor of sexual abuse, I didn’t think I would live if I stayed. With $300 in my pocket, I arrived in Sydney. I was 19’.

Mariam started university but couldn’t find a job. A bar owner said, “I don’t want a Mohammed serving at my establishment.” At the time, Mariam didn’t understand what he meant. It took her a while to come to terms with Islamophibia and racism.

Of course, Mariam did eventually get a job, graduated, went on to do a Masters. She researched how religious discourse in policy impacts women’s development in a country. And, boy, she loved it!

So much that, In 2016, Mariam was elected Women’s Officer of the Sydney University Postgraduate Representative Association (SUPRA)- the only woman of colour in the organisation. Here, she founded the Survivors Network – a peer support group for survivors of sexual assault. At the same time, she was the Gender Coordinator at the South Asia Study Group (SASG) where Mariam hosted Sydney University’s first ever Women of South Asia Summit!

The experience of being an ‘only’ opened her eyes to the world’s “Diversity and Inclusion” strategy. Mariam learnt that diversity for us means having a woman in the room. That usually means a white woman. After that, the doors open for men of colour. THEN it’s the turn of women of colour, among whom, Black and Indigenous women are the last through the door.

Pakistan taught Mariam to advocate for all women. Australia taught me to appreciate the nuances of this conversation. she understood her privileges better. She learnt from other cultures. She realized that her progress as a migrant woman will always come to a halt if her indigenous sisters are still oppressed. She learnt that, actually, there’s plenty of room for ALL women to succeed, together. And when she was privileged enough to get in a door, all she had to do was keep it open for the women after her.

In 2017, Mariam became the President of SUPRA. She led a community engagement plan to increase inclusion and diversity in the organisation. In the following year, SUPRA saw the biggest election turnout in its 40-year history. A record number of CALD students participated – and were elected! Her work was done. She had opened the door for the people who would come after her.

In 2018, Mariam finished her Masters and remained focused on her core passion: women’s development. ‘I care deeply for my tribe. Young women. Women of colour. Women who have experienced adversity, faced violence. I am all those things. I felt safe. But my peers struggled.’

So, in 2019, Mariam co-founded MoneyGirl – a social enterprise providing a financial literacy program for young women. This work was made possible with the support of the Foundation for Young Australians (FYA), ygap, and the Bright program by Lendlease. ‘With MoneyGirl, I’m on a mission to make financial independence something all young women aspire to.’

‘That’s the work I am continuing today – enabling my tribe to unleash their full power and find freedom, so fewer and fewer women have to live with abuse and violence.’