Mark Schwarzer is a Premier League Expert & Former EPL Player & Socceroo Legend! With a successful football career spanning over 25 years, which saw him become Australia’s most capped player by appearing in green and gold on 109 occasions, it’s no wonder Mark Schwarzer has become a football icon. 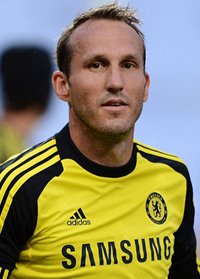 With a successful football career spanning over 25 years, which saw him become Australia’s most capped player by appearing in green and gold on 109 occasions, it’s no wonder Mark Schwarzer has become a football icon.

Mark began his professional career aged 19 with the Marconi Stallions in the National Soccer League, where he was put on the radar of some of Europe’s biggest clubs.

Mark made his Premier League debut in 1996 for Middlesbrough, where he spent 12 seasons before moving to London to play for Fulham. His career cultimated with stints for both Chelsea and Leicester City, where he was part of the squads that claimed Premier League titles in 2015 and 16 respectively. In total, Mark made over 500 top flight appearances.

Mark also appeared at two World Cup tournaments for Australia, having been the hero in the Socceroos’ droughtbreaking qualification for the 2006 event in Germany, by saving two penalties against Uruguay.

Mark Schwarzer’s success is proof that sometimes what goes into a victory is not as important as what is kept out. At 194 centimetres tall (or horizontal), it’s just as hard to go past Mark’s good nature as it is to breach his football goal. In soccer his ability to guard the net has been at the heart of English Premier League and European club campaigns as well as Australia’s return from the FIFA World Cup wilderness after thirty years.

Mark Schwarzer speaks English and German but probably knows how to communicate ‘cool’ in any language. His intimidating height and reputation are foiled only by his good nature.

Since retiring from professional Football in 2016, Mark has established himself as one of the Australia’s top football commentators. Mark works with Optus Sport as a commentator, providing expert opinion, whilst conducting interviews with the biggest names in the sport.