Print
A nine times Grand Prix winner, Mark Webber is arguably one of motorsport’s most popular and high-profile stars who despite the glamorous trappings and lifestyle of F1 has stayed true to his laid-back Aussie roots and traditions. Mark’s fairy tale journey from Queanbeyan kid to world class athlete is an enthralling and entertaining story. 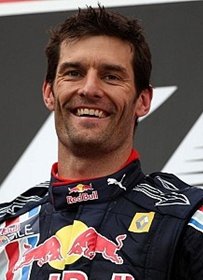 A nine times Grand Prix winner, Mark Webber is arguably one of motorsport’s most popular and high-profile stars who despite the glamorous trappings and lifestyle of F1 has stayed true to his laid-back Aussie roots and traditions. His no-nonsense, straight-talking personality combined with his strong sense of sportsmanship and fair play have endeared him to fans the world over, and he remains a top-drawer attraction for media and sponsors.

After hanging up his F1 boots at the end of 2013, Australian driver Mark Webber  embarked on a second season in the FIA World Endurance Championship with Porsche in 2015. The 38 year old began an exciting new chapter in his illustrious racing career when he returned to sports cars at the beginning of 2014 following a fifteen year hiatus. The successful debut season of the #20 Porsche 919 Hybrid LMP1 car saw Mark and his teammates claim three podium finishes and challenge for the lead at the famous Le Mans 24hr Race against the oft-proven might of Audi and Toyota.

When Mark signed off on his Formula One career after twelve years in the sport, he had notched up 215 races, nine victories - most notably becoming a double winner of both the prestigious Monaco and British Grands Prix – and had accumulated an impressive tally of 42 podium finishes, 13 pole positions and 19 fastest laps. The Aussie finished third in the World Drivers’ Championship three times, including in 2013, lending credence to the fact it was always his wish to ‘step away while I’m still at the top of my game’.

Off the track, keen on outdoor pursuits and wanting to give back to his home country, Mark launched the Mark Webber Tasmania Challenge in 2003. Currently taking a sabbatical, the seventh cycle of the gruelling charitable adventure race took place in December 2013 and to date the event has raised over $1.5 million AUD for charities in Australia.

The less time-consuming environment of the WEC is happily enabling Mark to pursue more of his adventure-based goals and in 2014 Mark took on the legendary Leadville Trail 100 MTB – a one hundred mile mountain bike race across the high-altitude, extreme terrain of the Colorado Rockies, starting at 10,152 feet and climbing to 12,424 feet. He finished the race well within the golden nine hour window and ever the competitor, plans to return in 2015 to see if he can ‘shave off a few more minutes’.

Mark is equally well known for his high level of physical fitness and is a true lover of the great outdoors environment. One of his great passions is seeing people push their limits and setting goals outside of their comfort zones and this extends to Mark himself. Both Mark’s training and leisure time see him similarly committed to achieving excellence through sport.

Mark’s fairy tale journey from Queanbeyan kid to world class athlete is an enthralling and entertaining story, full of inspiration and amusing anecdotes. It’s a story that Mark is now sharing with audiences as an after-dinner, keynote and motivational speaker.