Print
From the award-winning magazine, Martha Stewart Living, to the best-selling product lines that bear her name, Martha Stewart shares the creative principles and practical ideas that have made her America’s most trusted guide to stylish living.... 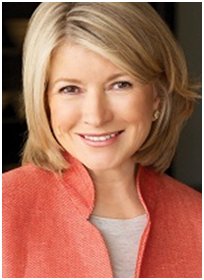 From the award-winning magazine, Martha Stewart Living, to the best-selling product lines that bear her name, Martha Stewart shares the creative principles and practical ideas that have made her America’s most trusted guide to stylish living. Millions of consumers rely on Martha Stewart as their guide to all aspects of everyday living – from cooking and entertaining to decorating and home renovating, and much more.


Martha has always drawn inspiration from her surroundings. Raised in Nutley, New Jersey, in a family with six children, Martha developed her passion for cooking, gardening and home-keeping in her childhood home on Elm Place. Her mother, a schoolteacher and homemaker, taught her the basics of cooking, baking, canning, and sewing; her father, a pharmaceutical salesman and avid gardener, introduced her to gardening at the age of three in the family’s small but orderly backyard plot.
While earning a bachelor’s degree in history and architectural history at Barnard College, Martha worked as a model to pay her tuition. She was married in her sophomore year, and, upon graduating, became a stockbroker on Wall Street, where she gained her early business training. After moving to Westport, Connecticut, in 1972 with her husband and daughter, Alexis, she developed a catering business that showcased her remarkable talent and originality. Her unique visual presentation of food and the elegant recipes she created for her catered events were the basis for her first book, Entertaining, published in 1982.
Martha’s creative vision is the blueprint for Martha Stewart Living Omnimedia and its expansive multimedia and merchandising portfolio. MSLO’s media offerings encompass award-winning magazines such as Martha Stewart Living and Martha Stewart Weddings; innovative websites, including marthastewart.com, and digital apps; Martha Stewart Living Radio on SIRIUS channel 112 and XM Radio 157; and bestselling books like Martha Stewart’s Cooking School, Martha Stewart’s Encyclopedia of Crafts and Martha Stewart’s Homekeeping Handbook. The sixth season of the Emmy Award-winning daily, “how-to” series, The Martha Stewart Show, premiered in September 2010; the show anchors a full slate of programming from MSLO on Hallmark Channel.
Martha was a pioneer in bringing high-quality products to mass market with Martha Stewart Everyday products at Kmart. Today, the company’s merchandising offerings include the Martha Stewart Collection of products for the home at Macy’s; the Martha Stewart Living line of home-improvement products at The Home Depot; Martha Stewart Crafts at Michaels; Martha Stewart Clean home-cleaning solutions with Hain Celestial Group; destination weddings with Sandals Resorts; Martha Stewart Pets products at PetSmart and more.
In 2007, Martha unveiled the new Martha Stewart Center for Living at the Mount Sinai Medical Center in New York. The center is an outpatient facility for geriatric medicine, providing clinical care and education for patients, offering training for physicians and coordinating healthy-aging research and practices. Martha was inspired to create the center by her mother, Martha Kostyra, who remained active and engaged in life to the age of 93.
Subscribe
© 2022 Platinum Speakers