Print
Former Naval Commander, Cultural change and Leadership speaker Martin Brooker is a highly awarded veteran of 37 years' service as an officer in the Royal Australian Navy. A professional speaker and skilled facilitator of complex matters, he is also an expert on leadership growth, teamwork and strategy. 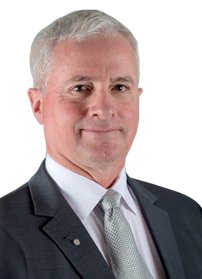 Your presentation “Leadership under Fire” hit the mark beautifully and we were able to build upon the themes you introduced to the group later in the day. The success of your presentation was reflected in the lively question and answer session that you generated and a number of my staff privately expressed their thanks and approval. Once again thank you for taking the time to share your valuable insights and its application to private enterprise leadership.

Martin is clearly a skilful presenter whose messages appeal equally to both men and women. As a woman in the audience I was able to easily relate to his stories, enjoyed them and felt that he had a great deal of respect for people in general. Gender was not introduced to the conversation, which unfortunately has not been my experience with some others. I found Martin to be someone that brings great value to leaders and potential leaders within our community.

Your speech was both entertaining and thoughtful, with many insights into volunteering and giving to the community. Your personal experiences and those of your family touched a chord with many of our volunteers, staff and Board members. I would not hesitate to recommend your services.

Martin's highly engaged style and entertaining presentation provided a great springboard for us to talk about working together and getting the most out of our TEAMs. The energy and enthusiasm was evident and his personal anecdotes lent further credence to his message...a great way to start our conference.

Former Naval Commander, Cultural change and Leadership speaker Martin Brooker is a highly awarded veteran of 37 years' service as an officer in the Royal Australian Navy. A professional speaker and skilled facilitator of complex matters, he is also an expert on leadership growth, teamwork and strategy.

The founder and Director of Quench Group in Canberra, Martin Brooker works with individuals and groups to define their needs and personal strengths then develops bespoke leadership programs to help them reach their potential and achieve optimum performance.

Martin Brooker's extensive Naval career included command at sea, and operational service in the Middle East, Afghanistan and the Pacific. He retired from the Royal Australian Navy in March 2015 with the rank of Commodore.

Martin has always been passionate about 'people leading people' and developing others. During his service he led teams on active duty as well as implementing cultural shifts as the program director for the Navy's biggest change program, New Generation Navy. Martin Brooker was recognised with several awards during his time with the Royal Australian Navy. He was awarded the Conspicuous Service Cross in the 2004 Queen's Birthday Australian Honours for 'outstanding achievement in Command of the Maritime Task Group in the Solomon Islands during the period July - November 2003; received a Commendation for Distinguished Service the 2014 Queen's Birthday Australian Honours for 'distinguished performance of duty in warlike operations as Deputy Commander in the Middle East during the period November 2012 - May 2013; was awarded the Australia Day Medallion in 1999; and the United States Secretary of the Navy Commendation for meritorious service on exchange with the US Navy between 1994-95. He. He was Dux of RAN Principal Warfare Officers Course in 1989.

Since leaving the Navy, Martin has specialised in helping individuals and organisations realise their potential through personal and organisational change. An experienced program leader and facilitator of capability delivery and change management programs in the public sector, he provides crucial leadership influence with stakeholders to deliver leadership development, coaching and mentoring programs, HR systems, cultural change projects and structural change assurance.


Martin Brooker specialises in the areas of: