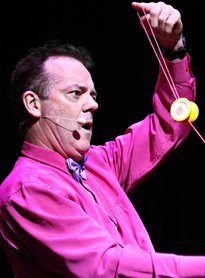 “He doesn’t swear and he doesn’t do smut which is a bonus when trying to cater for a crowd of diverse delegates. Quite frankly, he doesn’t need to, as he’s got plenty of other things going on. Nice bloke. Great show. Very good feedback from attendees”

“A diverse gathering in both age and background as he was dealing with, to hit the mark, was a compliment to Martin’s abilities as an entertainer”

Martin developed a script which covered topics such as the use of humour, maintaining your sanity, goal setting and keeping a balance in life.  Martin was a great success.  The use of custom made College yo-yos were certainly a highlight.

This year we were fortunate to engage Martin Ralph. For mixed company of all ages it was particularly refreshing to have someone of Martin's caliber entertaining us with a clean, clever and funny show. As far as our company goes after our experience with Martin we have no hesitation in recommending him for any function large or small.

Martin Ralph travels from VIC
Fee Range: Up to $5000

Over this time Martin has perfected his unique, impossible to compare, performance. Thanks to his Elite Olympian Athlete and Coaching background he is aware of what is required to professionally prepare, entertain and captivate his audience.

Using his marvellous inventions including a self propelled gyroscope that runs through the audience, the world’s largest spinning tops, stringless yo-yo and much more, has Martin’s audiences constantly provide him with standing ovations.

Martin is also a no nonsense, experienced, motivational speaker. Having been an Olympic Athlete and Institute of Sport Coach, Martin has fine tuned his ability to motivate and compel his audience to reach greater heights both for the organisation they represent and for themselves personally. Martin has completed thousands of tailored motivational presentations but his Comedy incorporating Mad Science and Tailored Motivation is what makes Martin Ralph unique.

Martin also offers “Hoaxing”. Martin is introduced as a serious speaker who subtlety converts that speech into tailored comedy suited to your organisation’s theme and objective. He can personalise his material for the well known identities associated with your organisation. “Hoaxing” takes the audience by surprise adding to the compelling message Martin has been instructed to provide your audience.

Clean and clever comedy makes Martin a guaranteed success for your next function.

Satisfied references about Martin come from Ford Australia, Toshiba, Royal Australasian College of Surgeons, Shire Councils, Firefighters, Wine Companies, Marketing Consultants and more. The common thread of these references being how funny, unique, engaging and adaptable Martin is and how successful their event was because of Martin’s tailored contribution.