Print
Marty Fields is a versatile, widely experienced comedian and presenter - a valuable asset to any event. His excellent work ethic, commitment to quality and service - combined with his high profile generated by extensive television work - make... 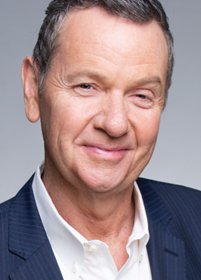 The structure you provided as MC and keeping the show on the road, including the excellence of your comedy performance provided the special 'addition' that made for a memorable function.

It was a difficult audience who in the main had just arrived from interstate and overseas, but Marty showed he was a true professional and definitely got the conference off to a flying start.

Marty is an excellent comedian and host - Short, sharp and snappy routine, and we loved the ANZ research he did - he was eager to please. And that list of countries piece he does is jaw droppingly clever.

You were an exceptional highlight to our AGM. Our conservative content guidelines were adhered to very professionally without sacrificing any of the laughs.

Your performance at our VIP Christmas event was extraordinary. Our clients raved about you, and the preparation work you had done to make sure you hit the mark on the night was obvious. Congratulations and see you next year.

Thank you for an amazing performance. It was such an important event for us and your attitude and attention from inception to performance made our organising job easy. How do you do it?

Marty is an extremely talented and funny man, and he knows his football too! You’re an AFL endorsed entertainer.

Marty Fields travels from VIC
Fee Range: Up to $5000

Marty Fields is a versatile, widely experienced comedian and presenter - a valuable asset to any event. His excellent work ethic, commitment to quality and service - combined with his high profile generated by extensive television work - make Marty a smart choice for your next corporate gathering.

As a Comedian - Marty Fields is a rapid-fire power station of material and one of the genuine big guns on the Australian comedy circuit. He began his stand-up career in 1987, playing the comedy circuit in hotels and clubs all over the country.

Well recognised from his five years on Hey Hey it's Saturday, The Battle of the Sexes, Blankety Blanks or his character Roy Holland on Blue Heelers, as a Host/MC Marty combines his unique style of humour with a finely tuned sense of propriety and occasion. His attention to detail, charisma and twenty-five years involvement in prestigious corporate events, makes Marty one of the most sought after MCs in the country. He has hosted successful and diverse functions for most major corporations, both in Australia and overseas, including Toyota, Nestle, CUB, Best Western, Millenium3, Coates Hire, The PGA Tour and TT Line. Marty has presented many awards nights including The Australian Music Awards, ADMA Awards, A.G.C. Awards, the NSW Retail Awards, Australian Greeting Card Awards and the Network Video Awards, as well as major sporting events and fundraising auctions.

Marty has anchored countless major corporate conferences and roadshows, traveling the country and the world for Sensis, Hilton Hotels, Beaurepaires and Microsoft among many others. He’s developed impressive interview abilities and has chaired many lively Q&A sessions. Marty also possesses unique auctioning skills and brings humour and excitement to any fundraising auction, having been the host of the weekly auction television program, Bid On TV for the Nine Network.

Another of Marty’s elements is his team building strategies and activities at conferences and events that build strong group values, learning, cooperation and fun. His years of intertwining comedy and instruction really shine through when it’s time to get your group moving. He has developed dozens of unique games and tests that rely on team decision making. It’s a terrific way for groups to bond during a conference.

As the bestselling author of three comedy books, he is recognized as Australia’s authority on one-liners for every possible topic. His corporate comedy performances have been praised for the past twenty years by regular clients such as Caltex, Telstra, Coca Cola, Tyrepower, The AFL, Ford, BHP, Shell, IBM, Beaurepaires and Cadbury.

Marty has become a popular presenter on Melbourne’s 3AW. An accomplished pianist and songwriter, Marty can produce specialized songs, jingles and music for events and companies and individuals, as well as being able to add piano/vocal comedy to his standup performances, which can often add that special difference to an event.

As another point of difference, Marty can host a comedy bus tour through any locale, providing commentary on the way that can be as accurate or ridiculous as the client requires.

Recently nominated for a Mo Award as the best stand-up comedian in the country, in 2005 he was inducted into the Australian Comedy Hall Of Fame. Marty is also considered one of our great comedy exports, and has just returned from his fourth tour of the United States where he performed in Phoenix, Chicago, Las Vegas, L.A and headlined for a week at the New York Comedy Club in Manhattan. His attention to detail as well as his ability to tailor his act content to suit all types of audiences and tastes without sacrificing laughs, sets Marty apart as one of the premier corporate comedians in Australia.