Print
Mary Therese Winifred Robinson served as the seventh, and first female, President of Ireland, serving from 1990 to 1997, and the United Nations High Commissioner for Human Rights, from 1997 to 2002. She first rose to prominence as an academic,... 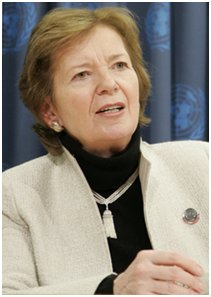 Mary Therese Winifred Robinson served as the seventh, and first female, President of Ireland, serving from 1990 to 1997, and the United Nations High Commissioner for Human Rights, from 1997 to 2002. She first rose to prominence as an academic, barrister, campaigner and member of the Irish senate (1969–1989). She defeated Fianna Fail an Lenihan and Fine Gael's Austin Currie in the 1990 presidential election becoming, as an Independent candidate nominated by the Labour Party, the Workers Party of Ireland and independent senators, the first elected president in the office's history not to have the support of Fianna Fáil.
She is credited by many as having revitalised and liberalised a previously conservative political office. She resigned the presidency four months ahead of the end of her term of office to take up her post in the United Nations. Robinson has been Honorary President of Oxfam International since 2002, she is Chair of the International Institute for Environment and Development (IIED) and is also a founding member and Chair of the Council of Women World Leaders. Robinson is also one of the European members of the Trilateral Commission.
She serves on many boards including as chair of the GAVI Alliance (until 2010) Robinson’s newest project is Realizing Rights: the Ethical Globalization Initiative, which fosters equitable trade and decent work, promotes the right to health and more humane migration policies, works to strengthen women's leadership and encourage corporate responsibility. The organisation also supports capacity building and good governance in developing countries. She is Chancellor of the University of Dublin. Since 2004, she has also been Professor of Practice in International Affairs at Columbia University, where she teaches international human rights.
Robinson also visits other colleges and universities where she lectures on human rights.
In 2004, she received Amnesty International's Ambassador of Conscience Award for her work in promoting human rights.
Subscribe
© 2022 Platinum Speakers