Print
Having had a stella career  representing Queensland, the Kanagaroo’s and the Wallabies, Mat Rogers finished his career back where it all started, in the NRL with the Gold Coast Titans retiring in 2011.  Mat is an inspiration to many, highly motivational and engaging through his presentations. 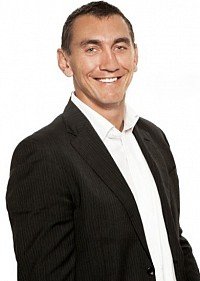 Dual-code international Mat Rogers was both a prominent figure in rugby league and union, the son of legendary Cronulla centre Steve Rogers ultimately surpassed his father’s record as the greatest point-scorer in club’s history before leaving the code to play rugby union.  After a stella career representing Queensland, the Kanagaroo’s and the Wallabies, Rogers finished his career back where it all started, in the NRL with the Gold Coast Titans retiring in 2011.

On the field, he displays an outstanding natural talent with the ability to invoke fear in even the fiercest competitor. Off field, Mat is devoted to his wife Chloe Maxwell, one of Australia’s best-loved models and television personalities. The couple wed in 2008 at a lavish wedding in Sanctuary Cove, Mat and Chloe’s young family includes their baby girl Phoenix, young son Max and Mat’s older children Jack and Skyla.

Look closer and you’ll see there’s much more to Mat than his acclaimed international sporting career and satisfying family life. Eloquent, engaging and endearingly frank, he is fast becoming known as a talented lifestyle personality. Mat’s down-to-earth attitude and cheeky sense of humour give him a boy-next-door appeal that enables him to establish relationships easily with a vast range of people including fans and sponsors.

Mat is an inspiring motivational speaker delivering valuable learning’s in an understated eloquent manner. He is experienced in corporate presentations, sporting functions and Q & A sessions and has thoughtful opinions on many relevant topics but especially how to overcome the obstacles in life.

Mat now lives on the Gold Coast and with his wife Chloe are devoted to the charity they set up after discovering their son was autistic, so they could help other families with autistic children www.4ASDKIDS.com

A family man, Rogers spends his time on continually developing 4 ASD Kids, a charity founded by himself and his wife Chloe Maxwell that simply raises money to sponsor kids affected by Autism Spectrum Disorders into programmes.

Mat is a talented corporate speaker and very capable MC.  He has been able to balance how he engages at certain events with a tremendous experiences from his professional sporting career, corporate life and charity roles.  He is highly entertaining and motivating.