Print
A remarkable woman, a remarkable life, a remarkable story! Matina Jewell is a special breed of person – an Australian to be proud of. Her audience is taken to a world we know little of and astounds us with her courage and integrity. 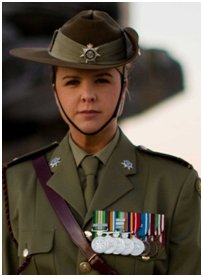 “Matina is a speaker that will truly inspire any audience and take most on a journey of self-reflection as a result. I would recommend her to any organisation considering her for future events.”

“Matina Jewell is a special breed of person – an Australian to be proud of. Her audience is taken to a world we know little of and astounds us with her courage and integrity.”

“The crowd loved your presentation and there were quite a few emotions flowing. Feedback on your section was superb, with participants rating it the most engaging presentation of the day.”

“Matina is a powerful and engaging speaker with a story to match. Our audience was captivated ... (and) were able to take away some valuable business lessons on leadership and change management in particular.”

A remarkable woman, a remarkable life, a remarkable story! Matina Jewell is a special breed of person – an Australian to be proud of. Her audience is taken to a world we know little of and astounds us with her courage and integrity.

Be inspired. Hear how Matina cheated death, took command and showed pure courage while leading her teams under extreme conditions right around the globe – and under fire during the Lebanon War. Brave, dignified and sharing her experience and insight in her down-to-earth style, take-home value from this speaker is priceless and will have lasting impact on your audience!

After graduating with honours from ADFA and RMC – Duntroon, Matina joined the Royal Australian Transport Corps where she specialised in Amphibious Operations. Matina is one of the very few females in the Australian Defence Force to have passed the physically demanding Navy Divers’ course.

Matina has deployed on five overseas operational missions. While with HMAS Kanimbla, she saw active service twice, on the second occasion in the North Arabian Gulf in the early stages of the war on terror. In addition to her command of the ship’s Army Department at the age of just 24yo, Matina boarded ships smuggling contraband, worked with the elite American Navy Seals, fast-roped out of helicopters to secure docking locations and led the ship’s dive team.

While an Adjutant, Matina deployed as part of the intervention force into the Solomon Islands, where she played a critical role in the capture of the notorious militia leader, Jimmy ‘Rasta’.

Matina later deployed as a Peacekeeper to Syria and then Lebanon as part of the United Nations Truce Supervision Organisation (UNTSO). During her time working as the only Australian and woman at Patrol Base (PB) Khiam on the border between Israel and Lebanon, full-scale war broke out. After a week of dangerously close near misses, Matina conducted a team rotation using UN armoured vehicles. It was while commanding this convoy, Matina was seriously injured (five fractured vertebrae and other horrific internal injuries). Just days later, PB Khiam was destroyed, killing all UN personnel – her ‘brothers’ – manning the base.

Matina has a Masters in Project Management, speaks Arabic and Indonesian and was an active sportswoman, representing state and country in multiple sports. Retired from active duty with numerous distinctions in 2009, Matina is an organisational advisor, in-demand international speaker and best-selling author of her memoir ‘Caught in the Crossfire'.

Matina is currently appointed to a number of boards including the Prime Ministerial Advisory Council, providing advice to the Prime Minister & government on defence and veteran issues and the National Mental Health Forum. Matina previously served on the Anzac Centenary Commission along with former Prime Ministers Hawke & Fraser.

Despite a busy schedule, Matina also volunteers her time as the Ambassador to the Australian Peacekeepers Memorial Project, along with other charities.

Matina was the subject of a high-rating two-part ABC documentary titled ‘The Blue Beret’ Australian Story along with Bio Channel’s ‘I Survived’ in Australia and internationally. Matina, along with her husband, recently celebrated the 1st birthday of their little miracle – Sierra and as Matti’s says, her most important mission to date; Motherhood.

•Leading through adversity and change

•Communication in a crisis

•Facing fear and having a go

•Thinking outside the box & making it work

•The importance of humour

•Stretching to your potential

•Overcoming the fear of failure

•Managing emotions as a leader