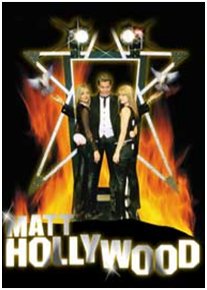 Matt Hollywood travels from QLD
Fee Range: Up to $5000

Matt Hollywood is one of Australia’s most nationally recognised comedy entertainers. Performing around 300 shows every year at Conferences, Corporate Events, Gala Dinners, Awards Nights, Business Functions and more, he combines impressive magic and illusions with hilarious comedy to create an impressive, clean and hilarious corporate show for you and your guests. Whether you have 50 people or 500 people attending your next event, one thing is for sure – your guests will not forget the amazing magic of the Matt Hollywood Magic Show.
Matt Hollywood has been featured amongst the best of The Footy Show comedians and is regularly featured on numerous television shows including Mornings with Kerri-Anne, Big Brother Up Late, Ready Steady Cook, The Shak, The Big Night In, Toasted TV and many more. For the past 10 years, he has entertained companies and individuals across the globe with his hilarious mind-blowing magic and Las Vegas style illusions.
After winning numerous National and International awards for his skills including the coveted Australia’s ‘Champion of Magic’, his brilliant sense of humour set a new standard for entertainment. You are GUARANTEED ‘hilariously impressive and unforgettable performances’
Matt Hollywood is widely acknowledged as one of Australia’s incredible Magic talents. His brilliant sense of humour has set a new standard for entertainment and guarantees unforgettable performances. Whether you’ve seen him live or simply heard about the show, one thing's for sure - his dazzling stage presence will hold you mystified.
Matt Hollywood has gained an enviable reputation in the corporate world as a corporate entertainer - creating personalised magic shows to suit clients’ individual requirements. He has won multiple major National and International awards within the entertainment industry.
Whether it's Matt Hollywood’s famous grand illusion spectacular, customised business show, dynamic results driven trade show or his hilarious stand-up comedy magic after-dinner show, the results are the same... a delectable serving of side-splitting comedy magic you'll want to sample again and again!
Subscribe
© 2022 Platinum Speakers