Print
The multi talented comedian, actor & presenter Matt Okine is one of Australia’s favourite award winning comedians. Okine has scooped some major accolades in the past few years, including an ARIA and the prestigious Director’s Choice Award at the 2015 Melbourne International Comedy Festival for his intrinsically personal show, The Other Guy. 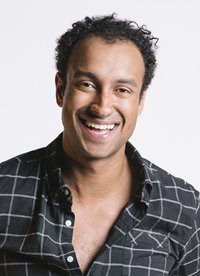 Matt MC'd and performed a comedy set at our 2018 Leaders Conference Gala and he was exceptional. The crowd loved him, he was so well prepped on our company and very professional to work with. We would all highly recommend him.

Everything went awesome! Matt was a dream to work with! He is a true professional, extremely accommodating, easy going and very friendly. He knew exactly when to be serious and when to crack a joke. His jokes were very tasteful and appropriate and he understood the crowd. He was the perfect MC and I would highly recommend him to anyone looking for an MC for any type of event.

Matt had the audience enthralled at our refugee fundraising gala and found the perfect balance of humour and cause. He was able to use hilarious anecdotes to get across messages of multiculturalism and inclusiveness.

On behalf of the Vita Group Project Team we would like to send our thanks and appreciation to Matt Okine. Matt MC’d and performed for our Gala event, which is a night of celebration and fun. The ballroom was full of 300 energised guests and he successfully had them in fits of laughter. Matt had clearly researched our company, he was professional, flexible with slight changes in our runsheet, welcoming and polite to our guests…we honestly couldn’t have asked for more. If your looking for an MC to bring your event to life than look no further than Matt. Highly recommend.

Matt was a wonderful MC at Sydney Comedy Festival’s charity showcase evening for Camp Quality. He kept everyone laughing throughout the evening, but had the warmth and empathy to create a genuine understanding amongst the audience of the work that Camp Quality does.

The multi talented comedian, actor & presenter Matt Okine is one of Australia’s favourite award winning comedians. Okine has scooped some major accolades in the past few years, including an ARIA and the prestigious Director’s Choice Award at the 2015 Melbourne International Comedy Festival for his intrinsically personal show, The Other Guy. Following the success of this live stand-up show the popular TV channel Stan announced The Other Guy as one of the new original productions for 2017.

Okine performs sell out national tours of his live shows year in, year out, and has gained much popularity on the festival circuit with featured annual performances at the Australian and New Zealand Comedy Festivals, as well as appearing at JFL Montreal and Edinburgh Festival Fringe. He has toured in London, Singapore, Hong Kong & India, and has supported international acts including Dave Chappelle, Aziz Ansari and Chelsea Handler. Matt has also made appearances in several TV shows including ABC TV’s It’s a Date and Dirty Laundry Live, SBS’s Legally Brown, Ch 7’s Orange Is The New Brown and Ch 9’s Doctor Doctor.

Matt spent 3 years co-hosting Triple J’s hugely successful Breakfast Show before hanging up his headphones to go into production on his television adaption of his award-winning semi-autobiographical stand up show The Other Guy for Stan. He co-wrote and starred in the show which aired in August last year and earned him a 2017 AACTA nomination for the Subscription TV Award for Best New Talent.

Matt is currently working on his debut book and continues to appear at various events and festivals around the world.