Print
Matthew Hayden has established himself as the world's most outstanding batsmen in both Test and One-Day International cricket, with his world record Test 380 confirming this lofty status. This extraordinary, world record breaking 622 minute... 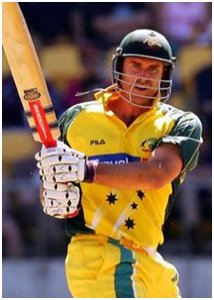 Matthew Hayden has established himself as the world's most outstanding batsmen in both Test and One-Day International cricket, with his world record Test 380 confirming this lofty status. This extraordinary, world record breaking 622 minute innings carried him into the record books. Matthew now has 16 Test centuries and has passed 4000 runs in 46 Tests. Only Sir Donald Bradman (31 Tests) passed this milestone quicker.
From the moment that he struck a magnificent 149 in his maiden first-class innings, Matthew has continued to demonstrate an unquenchable thirst for runs. His sheer weight of runs in domestic cricket, which includes a record 24 centuries for Queensland, led to his elevation to the international arena, where he has made a decisive mark for himself.
Hayden's qualities were initially showcased for Australia during a phenomenal personal tour of India in early 2001 that netted him 549 Test runs from a mere six innings. Striking evidence of his ability also arrived in twin home series against New Zealand and South Africa in 2001-02, when he cracked four individual centuries and joined with fellow opener Justin Langer to produce a world-record four double century partnership in the course of a single season.
With the amazing tally of 1391 runs, Hayden achieved another honour in 2001 when he usurped Bob Simpson as Australia’s most prolific Test Match run-scorer in the course of a single calendar year. Subsequently, in early 2002 Matthew was the runaway winner of Australian cricket's highest individual accolade, the Allan Border Medal and named Australia's most outstanding test player of the year.
His incredible form continued on Australia's tour of South Africa, notching his fourth century in as many Tests. Unfortunately he narrowly missed out on a century that would have been his fifth in a row, dismissed for 96. Only Sir Donald Bradman, with six from six, has more in a row. Matthew was named Wisden Cricketer of the Year in 2003 and in September 2004 was named by the ICC in the World Test Cricket Team of the year. In 2004 Matthew scored in excess of 1000 Test runs for the fourth consecutive year, the first batsman in the history of the game to do so.
Former Australian Captain Greg Chappell lauds Matthew's leadership potential stating that "his attitude, positive nature and courage are inspiring to others". He has continued to blossom, with the highest individual score of 380 against Zimbabwe at Perth in 2003, surpassing the previous mark of 375 held by the West Indies' Brian Lara, confirmation of the ""world's best"" tag. Matthew Hayden is a well-liked and respected member of the cricket community, not only for his feats on the cricket field but also his outgoing personality off it. He is a lover of most things outdoors but makes a special effort of wetting a fishing line with his mates when time permits.
Subscribe
© 2022 Platinum Speakers