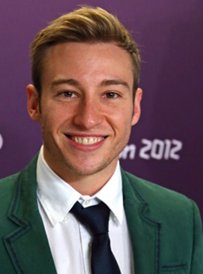 Awesome address to all the young sport leaders in the audience. Matt’s messages will impact on the way they approach their future choices in life.

Born 2 March 1988 in Brisbane, Queensland, Matthew Mitcham OAM is the 2008 Olympic champion in the 10m platform, having received the highest single-dive score in Olympic history. He is the first Australian male to win an Olympic gold medal in diving since Dick Eve at the 1924 Summer Olympics, and one of few openly gay athletes at the 2008 Summer Olympics.

2008 Olympic diving champion and history-making athlete Matthew Mitcham, OAM made a splash at the 2014 XX Commonwealth Games in Glasgow adding a bronze.

Mitcham originally competed as a trampoline gymnast. He was discovered by Wang Tong Xiang, a coach at the Australian Institute of Sport Diving Program, while at the Chandler Aquatic Centre in Brisbane's suburbs, and continued with both diving and trampolining for several years.

As a trampolinist, Mitcham represented Australia at the World Junior Championships in 1999 and 2001, winning the double mini-tramp event. He also competed at the Australian Youth Olympic Festival in 2003, finishing sixth.

From 2002 through 2004, Mitcham was a national junior champion in diving, winning the events in which he competed. Matthew Mitcham competed at the 2002 World Junior Diving Championships, where he placed 11th in the 1m springboard, 5th in the 3m and 16th in the 10m platform. In 2004, he won the silver medals in the 1m, 3m synchronized, and 10m platform events at the World Junior Championships. At the 2004 Junior Nationals, he won the 1m, 3m, and 10m and 3m synchro titles. At the 2004 Olympic Trials, he placed 3rd on the 3m and 10m individual events, 2nd on the 3m and 10m synchro events, and did not qualify for the Olympic team.

Taking a break from the sport in 2006, Matthew Mitcham returned in 2007 and started to train under current coach Chava Sobrino at the New South Wales Institute of Sport. In 2008 Mitcham won the 1m, 3m and 10m individual events at the Australian Nationals. Later that year he won the 2008 Diving Grand Prix event in Fort Lauderdale, Florida.

In addition to his talents on the diving board, Matthew has spent much of 2014 touring Australia with his own one-man show ‘Twists and Turns’. Bringing to life his book of the same name, Matthew tells the story of a true champion, both in and out of the pool.

Relayed with the honesty and courage for which Matthew is admired, his story speaks of the highs and lows of his incredible life from his struggles behind the international spotlight of low self esteem, anxiety, depression, self-harm and drug abuse through to the coming to terms with his sexuality as a gay man. Conveyed through theatre, song and the occasional foot tapping, Matthew's storytelling will have you laughing, crying and everything in between.

Matthew is of the firm belief that it's all about having a balanced life. "I don't have just one priority in my life right now," Matthew says. "To have that balance is a healthy thing, mentally and emotionally." Matthews showmanship came to the fore when he touched down in Glasgow to a welcoming throng of pipers. Matthew promptly pulled out his ukelele and joined in the chorus. This all-singing, all-dancing Olympian was the highlight of the day for other arriving athletes.

Matthew also had a successful showing on the Seven Network's Dancing with the Stars, registering the highest score in five dance styles to qualify for the Grand Final. Matthew and his partner Masha Beshal finished Runner Up.

In January 2016 Matthew announced his retirement from diving to focus on his equally successful media and entertainment career. Matthew Mitcham is a highly respected and popular individual who is admired globally not only for setting high standards and benchmarks in all areas of his life but also for constantly achieving them.

Away from the diving pool Matthew is a talented singer and musician, who invites you to share the highs and lows of his incredible life through theatre and song, along with a few surprises, a bit of foot tapping and loads of inspiration, in his first solo show. Based on his book of the same name, and told with the honesty and courage he is admired for, this live production of Twists and Turns is an inspiring story of a true champion – in and out of the pool.

As a speaker, Matthew shares with you his journey of success, experience with drugs and depression. He is a great motivational speaker, leaving the audience inspired and oftentimes entertained in the process. As one of Australia's greatest athletes and an Olympic Gold Medallist’s Matthew is also an extremely popular TV personality, social media extraordinaire and author of his biography “Twists and Turns”.