Matthew Richardson was an outstanding Richmond Tigers AFL player.  On field he was known for his passion, work ethic, goal kicking and marking prowess. Post AFL he has launched himself into the world of AFL commentary.  A motivating speaker and MC, Matthew inspires those around him. 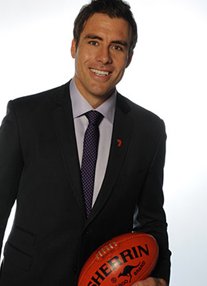 'Matthew's laid back and approachable nature was a high point of the evening, took time to talk to everybody and his speech was a mix of humour and career highlights - highly recommended'

Matthew ‘Richo’ Richardson travels from VIC
Fee Range: Up to $5000

In a long and successful AFL career Richo shares his passion and experience as a speaker and motivator. Richo’s remarkable 282-game career which saw him kick 800 goals over 17 seasons. He was Richmond Football Club's key forward through the late 1990s and the 2000s, the club's leading goal-scorer thirteen times and has been selected in the All Australian team in 1996, 1999 and 2008.

Undoubtedly one of the Richmond Football Club's greatest ever players, Richo's sensational skills on the field include being the leading goal kicker for the Tigers on 13 occasions, three All Australian selections and a Jack Dyer Medal. Tenacious and determined, he was renowned for his marking prowess, speed and work rate, and in his 282 games with the club consistently gave his all, inspiring a legion of loyal fans.

A true, passionate, outstanding and loyal Tiger, he will not only go down as one of Richmond's all-time greats, but as one of the game's most entertaining and spectacular forwards of all time.

Off the field, Richo is known for his ability to engage, entertain and inspire those around him and has now turned his hand to media. Richo can be seen providing special comments during Channel 7's AFL Coverage, as a panellist on Channel 7's AFL Game Day, on www.richmondfc.com.au hosting their 'ROAR VISION' segments and can be heard providing special comments during AFL matches on 3AW .

As one of the modern game's greatest and beloved players, Matthew 'Richo' Richardson draws upon a long and successful sporting career in sharing his passion and experience as a speaker and motivator.