An inspiring and powerful keynote speaker, Michael O'Loughlin is passionate about encouraging and supporting Indigenous education, engagement, employment and opportunity.  Managing Director and Founder of CMC Indigenous Services, and a former AFL player with a 20 year career he played 303 senior AFL games for the Sydney Swans, he was twice All-Australian and he represented Australia in International Rules. 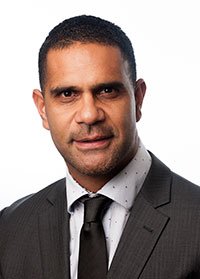 Michael O'Loughlin is the Managing Director and Founder of CMC Indigenous Services, and a former AFL player known for his agility, pace, panache and aerial prowess. During a 20 year career he played 303 senior AFL games for the Sydney Swans, was twice All-Australian and he represented Australia in International Rules.

An inspiring and powerful keynote speaker, Michael is passionate about encouraging and supporting Indigenous education, engagement, employment and opportunity.

Michael attended Salisbury North Primary School and Paralowie R-12 School, in South Australia. Both schools had a high Aboriginal and Torres Strait Islander population and life was tough. But football was part of Michael's DNA and he kicked a footy around in the mornings, in the afternoons, in the lunch break and at recess.

When Michael arrived in Sydney in 1995, at just 18 years of age, he had only played at under-17 level for Central District. Despite this, he was quickly idolised by the Swans faithful, who nicknamed him ‘Magic', although the nickname 'Micky-O' subsequently became his sobriquet.

At club level, Michael O'Loughlin won the 2005 Premiership Flag and was inducted into the Indigenous Team of the Century. A damaging forward, Michael became the games record holder for the Sydney Swans with a total of 303 games and he led the Swans goalkicking on three occasions for a total of 521 career goals. In 1998, Michael was awarded the club's best and fairest player. He was twice All-Australian and he represented Australia in International Rules.

In 2009 Michael founded the Goodes O'Loughlin (GO) Foundation, with his Sydney Swans team mate Adam Goodes. The Foundation focuses on next generation Indigenous education, employment, healthy lifestyles and role models. Michael says that one of the proudest personal moments of his life was returning to his old primary and high schools to offer Aboriginal and Torres Strait Islander students scholarships from the GO Foundation.

In 2016 Michael founded CMC Indigenous Services, a company that specialises in cleaning and property maintenance services. As Managing Director, Michael draws on his life experiences as a leader and mentor in the Indigenous Community to encourage and support Indigenous education, engagement, employment and opportunity.

Michael has also made a significant philanthropic contribution to the football and Indigenous communities through his affiliations with various Sydney Swans community initiatives, Indigenous literacy and numeracy programs, the National Aboriginal Sporting Chance Academy, the AFL Indigenous Academy and as co-founder of the GO Foundation.