Print
Michael is a high-profile business leader who transformed an ailing set of bakery shops in the late 1990s to position Brumby’s as the 2nd-largest bakery franchise system in Australasia with over 320 bakeries by 2007. Under Michael’s leadership,... 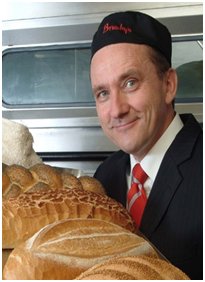 Michael is a high-profile business leader who transformed an ailing set of bakery shops in the late 1990s to position Brumby’s as the 2nd-largest bakery franchise system in Australasia with over 320 bakeries by 2007. Under Michael’s leadership, Brumby’s share price rose from 56c to $3.40 in just over 3 years.


In July 2007, Michael Sherlock resigned as Managing Director of Brumby’s after ASX-listed company RFG purchased Brumby’s for $46M.
Michael has appeared on current affairs, news and breakfast television programs as well as being featured in all leading newspapers and magazines in Australia and New Zealand on issues such as his innovative management techniques, business strategy and environmentally friendly, healthy (no preservatives) messages.
Michael is a regular columnist in BRW’s Smart Talk.
Currently, Michael Sherlock is a sought-after public speaker and sits on a number of advisory boards as a strategist and mentor, drawing on his vast experience in food, retail, and franchising management at the top level.
Michael has co- written Jumpshift! – Shift your business into hyperdrive: Create clear direction, real time feedback& an empowering culture that gives your TEAM “the owner’s eye”. He is a contributor to the book, Top Franchisees CEO’s secrets revealed and the soon to be released, Millionaire Mentors.
Michael has a Bachelor of Economics from Monash University and a Diploma of Education from La Trobe University.

How to grow your customer count
The importance to value adding rather than being price driven
Looking after customers to get repeat business
How to successfully market your business using the four types of marketing
How to reward and benchmark your team members
The Brumby’s story from cult to retail franchise leader
How to develop and implement a 5 year strategic business plan
How to get the most out of PR, survive a crisis and deal with the media
How to develop effective TVC on a low budget
Taking your business to the next horizon
Teamwork makes the dream work
Creating your 5 yr plan
Research, Strategy, Structure, People, Systems & Results
Monitor & control using the dashboard principle
Systemisation - "on your business not in your business"
Subscribe
© 2022 Platinum Speakers