Michael Usher has lived a lifetime … in 60 Minutes – his journey as a reporter on Australia’s popular news and current affairs show taking him through scorching deserts, freezing glaciers and everywhere in between. Michael is an excellent host and conference moderator and Q and A facilitator. 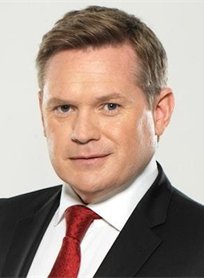 Michael Usher travels from NSW
Fee Range: Up to $5000

Michael Usher has lived a lifetime … in 60 Minutes – his journey as a reporter on Australia’s popular news and current affairs show taking him through scorching deserts, freezing glaciers and everywhere in between.

Michael’s career in broadcast journalism began in Western Australia – as a final-year cadet at Golden West Television Network in 1990, followed by posting in Bunbury and Kalgoorie before he joined STW9 Perth.

In 1993 Michael made the move to the harbour city and set up office with the team at TCN 9. Here, he reported the 1996 Atlanta Olympics then lead coverage of the 2000 Sydney Olympics (and the subsequent two Olympic and two Commonwealth games). However, his avid passion for travel and history were exploited with his assignment to the Nine Network’s US Bureau as a correspondent in 2001, and London Bureau (covering Europe and Middle East) in 2004.

During this half decade as a foreign correspondent, Michael covered many of the major stories that defined the generation, including: the September 11 terrorist attacks in New York, subway bombings in London and Madrid, war in Iraq, death of Pope John Paul II and Colombia Space Shuttle.

Upon returning home in 2006, Michael presented Nightline. In 2007 he was appointed news presenter for the Sunday program. He filed reports for 60 Minutes as a contractor in 2008 before joining the team a permanent member in 2009 – hosting the first leaders’ debate between Julia Gillard and Tony Abbott prior to 2010 Australian Federal Election.

Michael has created a career on the maxim that everyone has a story, and his ability to listen and transfer those tales to a greater audience is among the best in the business.

Michael may have explored every corner of the globe, but today after 25 loyal years with Channel 9, Michael made a huge decision to move to the 7 Network taking the position as their Presenter/Weekend News reader to be based more in Sydney to be closer to his children.