A powerhouse of Womens Football since the age of 16 when she first pulled on the jumper for Victoria in a Senior Representative game, which culminated in All Australian selection, there is so much that Moana has achieved in her football career. 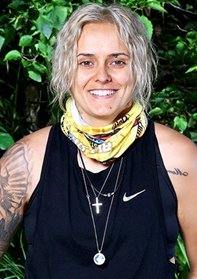 Moana had a great story which fitted our event theme of ‘inspiration’ to a tee. She was great to listen to and was happy to engage with the audience.

A powerhouse of Womens Football since the age of 16 when she first pulled on the jumper for Victoria in a Senior Representative game, which culminated in All Australian selection, there is so much that Moana has achieved in her football career.

With footy in her blood, a passion she shared with her late father, Gary, Moana has always loved playing AFL. However this didn't always continue to be the case during her early twenties when she some time away from the game before rediscovering the love in 2014 after seeing the changing landscape of Womens Football in Australia.

With Womens Football participation at an all time high since the commencement of the AFLW, Moana took her goal kicking prowess from suburban grounds to the big stage, representing the biggest sporting club in Australia, Collingwood for two seasons before moving to North Melbourne for a further season.

Since the AFL Womens Exhibition Game in September 2016 where Moana starred for the Western Bulldogs in there win against Melbourne, kicking 6 goals, the interest in Moana and her journey has been amazing. Especially as this game featured less than a week after the episode of Australian Story which focused on the lives of Moana and Susan Alberti, which many football and non football followers were drawn too.

This resulted in Moana speaking at quite a number of functions, plus signing sponsorship agreements with company’s such as NIKE, Gameday Mouthguard's, Special K, Remedy Kombucha, Herald Sun, NAB, McDonalds, and Myer to name a few. In addition to this, Moana released her own biography 'My Way' on Mothers Day, plus she has been the face of various campaigns for leading Australian and International Brands.

Whilst her life has changed, and people now stop her in the street to have a chat and wish her luck, her love for her family and football will always continue to be most important to her. This now includes her wife, Isabella Carlstrom, whom she married in a romantic ceremony in 2019 before being whisked off to film Channel 10’s Survivor “All Star” where she finished third. This was the second time she had featured on the show after contesting the “Champions v Contenders” series the year before.

Moana is the full time carer of her beautiful sister, Vinny, and runs a successful Traffic Management Company. In addition to this, Moana and and Isabella welcomed their first child Svea in November 2020.

My Way - Moana’s story is quite overwhelming – she is one of fourteen children, is a full-time carer for her sister Livinia who was born with Moebius Syndrome, & whom she is very close to. At an early age Moana was also the primary carer for her father who has since died of cancer, & her mother has multiple health issues. It would appear that Moana has had a hard life, but through it all she never gave up and has achieved far more than she would ever have imagined.