Print
Mujahid Ahmed is originally from the Sudan but was raised in the Middle East before moving to Australia in 2001 to reside mainly in Adelaide. Since then has been performing as MC and stand up comedian and keynote speaker sharing his life story and insights to mental health, multiculturalism, diversity and social issues. 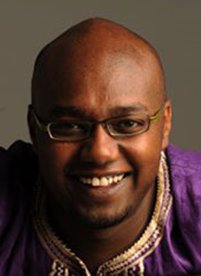 On behalf of the Australian National University I wish to thank you for your informative, insightful and at the same time incredibly humorous presentation for our Refugee Politics: Displacement and Exclusion in the 20th and 21st Centuries Course at which the former Minister for Immigration and Multicultural Affairs, The Hon Mr. Philip Ruddock also spoke. Our 200 students who were in attendance gave feedback that your speech was on-point, generous, thoughtful and original. We also found that you skilfully combined insights into the refugee experience, your personal story, and professional insights with respect to you work in the humanitarian sector. The Hon Mr. Ruddock also provided us with equally positive feedback after your presentation. Once again, we thank you for making the time to speak at the course, and we would love to invite you to speak to our students again in the near future and most certainly will recommend your services to other schools and faculties at ANU.

‘I had some fabulous feedback about your presentation. I think it was a lovely way to end the conference, with a few laughs and also a reminder to people that we ae very lucky here in Australia.

‘He has mastered the art of Australian Humour’

Thank you for being part of our Refugee Week event on 21 June 2017 at the University of Adelaide. Your reflections on the mental health of asylum seekers and refugees held in offshore detention was informative and insightful, and provided a meaningful perspective into an important issue for the audience. We also appreciated that you gave a humorous twist to what is usually a grim topic of discussion.

We hope that you might be a part of future opportunities to collaborate with RASSA.

Mujahid Ahmed travels from SA
Fee Range: Up to $5000

Mujahid Ahmed is originally from the Sudan but was raised in the Middle East before moving to Australia in 2001 to reside mainly in Adelaide. Since then has been performing as MC and stand up comedian and keynote speaker sharing his life story and insights to mental health, multiculturalism, diversity and social issues.

Mujahid Ahmed arrived in Australia in 2001 as a seventeen old from Sudan. During his time in Sudan, he was forcibly conscripted and made into a boy soldier who eventually ended up leading a platoon of boys as young as thirteen. Despite the shattered left arm and the bullet fragments in his right arm, he considers himself to be one of the lucky ones.

Seventeen years later, and the above story feels like a dream. Since then Mujahid has travelled to over thirty countries, learned to speak four languages, became a humanitarian professional and subject matter expert on refugees, a psychologist, the world’s Only Professional Sudanese Comedian, and most importantly he conquered all his demons related to his experiences

Aside from the personal experiences Mujahid endured and overcame, he holds a Bachelor of Psychology, a Masters in Social Development and held several senior management positions in health and human services in multiple Australian states as well as overseas. In 2008 he founded a company called Communique Cultural Solutions which provided cultural training, consultancy, and project management services across Australia. Previous clients included SA Police, The Department of Immigration ACT, and the Department of Education and Children's Services SA.

Africa and the Middle East