Print
Myf Warhurst is a refreshingly warm and down to earth media presenter and MC.  Myf  is a broadcaster, TV presenter, journalist & writer. She is currently Australia’s commentator for the Eurovision Song Contest alongside Joel Creasey, host of Our Place, a podcast that explores Australian culture, and co-host of the weekly arts and culture podcast Bang On with Zan Rowe. 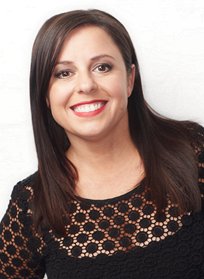 Myf had an easy, engaging manner that was immediately popular with the audience. She was easy to work with, flexible, warm and understanding of the nature of the audience - young students and teachers with an environmental focus.

Myf was professional, well presented and held the audience really well. She gave reference to who she was and how she fit in with the theme of the event to help guests, including internationals who may not have know who she was, relate to her. She adjusted extremely well when we had an unexpected last minute change during the opening ceremony and was well received by the audience. We were completely happy with Myf and would definitely be interested in working with her again.

Myf was fantastic, an absolute pleasure to work with, and instrumental in the success of the Awards night.

Myf was very professional, approachable, friendly and engaging. The student audience obviously were thrilled to have her there!

Myf Warhurst is a broadcaster, TV presenter, journalist & writer. She is currently Australia’s commentator for the Eurovision Song Contest alongside Joel Creasey, host of Our Place, a podcast that explores Australian culture, and co-host of the weekly arts and culture podcast Bang On with Zan Rowe.

Myf grew up in regional Victoria before moving to the city to study Music and Fine Arts at Melbourne Uni. She worked for some time as a journalist, providing arts and music stories for The Age and Inpress magazine, before becoming Managing Editor of the Melbourne street paper in 1999.

Myf was first introduced to radio as the showbiz reporter on Merrick and Rosso's Triple J Drive Show in 1999. When they moved on, Myf moved into a full-time gig at the Js, hosting the Saturday night request show in 2000 before landing the afternoon shift in 2003. Here Myf got to do all the things she loves best: playing CDs, talking about music, pop culture and chatting with folks. She then combined her loves to create her infamous daily segment show, The Trashy Lunchtime Quiz. It was also on this lunchtime shift that listeners once heard her sing along to an entire You Am I song on air after she left her microphone on.

After a few years, she moved on from Lunchtime to spend some time getting up superearly to do Triple J Breakfast with Jay and The Doctor. In January 2008 Myf left Triple J and joined her great mate Peter Helliar on the Pete and Myf Triple M Melbourne Breakfast Show. She and Pete enjoyed finding out way too much about each other over 18 months!

Between 2014 and 2017, Myf presented Lunch With Myf weekdays on ABC’s digital radio station Double J. The opportunity to play new releases, talk to musicians and have free reign to delve into the archives made Double J the perfect home for this massive music fan! From 2018 to 2019, Myf hosted the daily afternoon show on ABC Radio.

Myf has been a columnist for The Guardian and The Age, musing on the world around her and giving us an insight into her take on life. She guest-hosted on ABC local radio and reports regularly for The Project on Network Ten.

Myf is probably best known for her 7-year stint wrangling rock stars and other showbiz luminaries as a team captain on ABC TV's music/comedy quiz show, Spicks and Specks. After 277 episodes Myf, Alan and Adam decided to finish the show on a high note in 2011. Starting in Sydney in November, she toured the country with the guys performing the hugely successful Spicks & Speck-tacular – a concert version of the TV show. Over 80,000 dedicated fans came to farewell the trio over 27 shows with the tour wrapping up in Melbourne in January 2012.

In 2018, Myf, Alan and Adam returned to reboot Spicks for a one-off special that was the ABC’s highest rating show of the year. The gang got back together for yet another big special as a part of Ausmusic Month in 2019, as well as three exciting shows which ran through 2020. In 2021, for the first time since 2014, Myf, Alan and Adam will return with a full 10-episode series airing on Sunday nights.

Myf returned to ABC TV in 2012 with her first solo venture Myf Warhurst’s NICE, a series that embraced cultural icons of the past, the things that surround us, and all things... 'nice'. With one of the most recognizable voices in Australian entertainment, Myf also lends her voice to the popular ABC Kids show Bluey.

In 2020, Myf entered the South African jungle for the sixth series of I'm A Celebrity. Get Me Out of Here! Australia, where she was one of the most popular celebrity contestants. She hosted Delivered Live alongside Henry Wagons throughout COVID restrictions in Victoria and teamed up with Joel Creasey again to present the Coopers Live Loud and Local virtual entertainment series.