Modern day creative Natasha Pincus is inspirational and passionate about life and her enthusiasm for it is guaranteed to rub off. Natasha’s music video for Gotye’s “Somebody That I Used to Know” has been viewed by over half a billion people around the world. 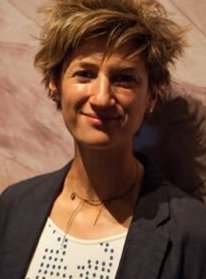 Fabulous presentation and it felt like every person in the room was just with you – no distraction or fidgeting! Powerful, energetic and pacey. Super thinking and connected presentation on genius. Truly Genius!

Natasha Pincus was one of the most talked about speakers at BIGSOUND Music+Design 2014. Natasha’s passion and drive coupled with her boundless talent made her a truly inspiring speaker, leaving the audience buzzing afterward.

Natasha Pincus is a woman of rare distinction. Her creative vision is utterly unique and her ability to communicate her stories in a dynamic, bold, brave and delightful way will surprise and inspire in equal measure. She's fresh, fun and insightful.

Natasha Pincus travels from VIC
Fee Range: Up to $5000

Modern day creative Natasha Pincus is inspirational and passionate about life and her enthusiasm for it is guaranteed to rub off. Natasha’s music video for Gotye’s “Somebody That I Used to Know” has been viewed by over half a billion people around the world.

Not only is Natasha Pincus a leading Australian creative and multi award-winning film director and writer, she is also a qualified and experienced lawyer and scientist.

Natasha Pincus graduated with first class honours in Law and Science. She worked as a research scientist and practiced corporate law before hanging up her lab coat and suit to focus on her screenwriting and directing career.

Natasha specialises in creating distinctive music video works and has directed internationally regarded videos for a number of Australia’s favourite musicians, including Powderfinger, Paul Kelly, Gotye, Missy Higgins, Kasey Chambers, Pete Murray, Paper Kites and Sarah Blasko.  Natasha has won two ARIA awards for Best Music Video and has been nominated for the MTV VMA for Best Music Video and Best Editing. Natasha’s iconic video for Gotye’s SOMEBODY THAT I USED TO KNOW has been viewed over 1.5 billion times on YouTube. Natasha created a major film work for the stage production of David Bowie’s LAZARUS at the Victorian Arts Centre for which she was recently awarded the 2020 Green Room Award.

Natasha has written and directed short films that have screened at dozens of film festivals worldwide. Natasha’s screenplay MIDDLE OF THE AIR was a winner of the UCLA Screenwriting Competition and her screenplay CLIVE was included on the US Hollywood Blacklist and was a semi finalist of the Nicholl Fellowship. The produced feature film of Natasha’s screenplay FELL, directed by Kasimir Burgess, premiered In Competition at the Sydney Film Festival. Natasha has written more than 20 feature film scripts, including adapting the Pulitzer-nominated novel SNOW CHILD for New York producers Amy Hobby and Anne Hubble (Tangerine Entertainment), and co-writing THE TWISTED for Ridley Scott’s Scott Free Productions.

Regarded by her peers as a true contemporary renaissance thinker, Natasha is a passionate, talented, dynamic and popular keynote speaker who loves to challenge, inspire and entertain her audiences on a wide range of topics.

With professional experience in a range of sectors - from Law to Science and back through the worlds of Film and Music - Natasha is uniquely placed to understand the cultures, needs and tastes of a wide variety of industries, their workplaces and members.

Natasha's insights into unlocking GENIUS are world class. She believes that there is more talent within you, and around you, than you have yet imagined. You just need to know how to access it.

Natasha loves speaking. Her insights are world class and she joyfully shares them with irreverence, charm and cracking wit, at a characteristic break-neck pace. Unforgettable and unorthodox, Natasha Pincus's talks are always a high energy experience, no matter what the topic.