Print
Brownlow and Norm Smith medalist, Nathan Buckley is one of the AFL’s most decorated players, with a long-running list of accolades from his 280 game playing career. He continues to leave a mark on the AFL world as a former coach of Collingwood and is a popular Speaker and Ambassador. 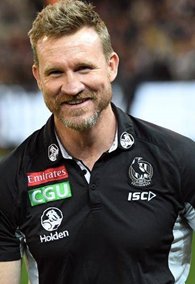 Brownlow and Norm Smith medalist, Nathan Buckley is one of the AFL’s most decorated players, with a long-running list of accolades from his 280 game playing career. He continues to leave a mark on the AFL world as a former coach of Collingwood and is a popular Speaker and Ambassador.

Buckley celebrated his 200th game as senior coach at Collingwood in 2020 and June 2021 he announced that his resignation from Collingwood.

Outside of football, Buckley is the father to two sons Jett and Ayce. He is a proud ambassador of Wolf Blass and a popular speaker covering a range of topics and events.

Born in Adelaide, Buckley travelled around Australia and spent his teenage years in the Northern Territory. A two year stint in the SANFL with Port Adelaide culminated in 1992 with a premiership, Magarey Medal as the league best and fairest, Jack Oatey Medal as best on ground in the Grand Final, and a club best and fairest.

1993 saw Buckley enter the AFL and play his first games with the Brisbane Bears. The inaugural winner of the AFL Rising Star Award, Buckley moved to the Collingwood Football Club ahead of the 1994 season where he was soon to become one of the club’s greatest players.

His six Copeland Trophy wins came hand in hand with seven All- Australian selections, 2003 his crowning season as he was named a joint winner of the Brownlow Medal and AFLCA Champion Player of the Year.

Regarded as a natural leader from an early age, Buckley has announced captain of Collingwood ahead of the 1999 season. During his 161 game tenure as Captain, Buckley led his side to two consecutive Grand Finals in 2002 and 2003, however fell short of victory both times.

In 2002 Buckley produced one of the great individual performances in a Grand Final and was awarded the Norm Smith Medal for best on ground, and in 2003 he was once again the leading disposal getter on the ground.

After 15 seasons at the highest level, Buckley retired at the end of the 2007 season. He carried the captaincy right until the end, and sits second on Collingwood’s games record list of most games as captain.

His playing career was decorated with countless awards which were recognised in his induction to both Collingwood’s Team of the Century as well as the Australian Football Hall of Fame.

Media: Following his retirement, Buckley joined Channel Seven, 3AW and The Age as a commentator and analyst and remained a respected figure in AFL ranks. He held these roles in the media for two years, while at the same time began his foray into coaching. He spent 2008 and 2009 as an AIS-AFL Academy as an Assistant Coach, and in 2009 coached Vic Country’s Under 16 side.

AFL Coaching Career: Throughout 2009 the wheels were in motion for Buckley to make a return to Collingwood in a coaching capacity. This eventuated as Buckley was named the Forward Line and Opposition Coach for 2010 and 2011, before taking over as Senior Coach from 2012.

In his first season in charge, Buckley led his side to a Preliminary Final, and played finals again in 2013. After a stint outside the top eight, Collingwood charged back to September action in 2018 as Buckley led them to a Grand Final. Despite the 5 point loss, the game is regarded as one of the best and most dramatic premiership deciders in football history.