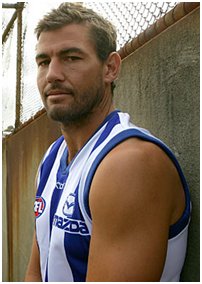 Nathan Thompson travels from VIC
Fee Range: Up to $5000


Nathan Thompson was one of the biggest off-season signings at the end of the 2004 season and to the Kangaroos delight he made his way to Arden St, after 7 seasons with Hawthorn. Drafted by Hawthorn with pick 82 in the 1997 National Draft, Nathan immediately made an impact with the Hawks as a strong marking key forward, who was also more than capable playing up the ground in the ruck.
However, 2004 was a low point for Nathan who revealed he was battling depression. In an attempt to revitalize his career he nominated to be traded by the Hawks and ever since has made a valuable and much needed contribution as a key position forward for the Kangaroos, leading the goal kicking for the club in both seasons 2005 & 2006. His consistent goal kicking form in 2006 and a season best haul of 8 goals against his former side the Hawks, was rewarded with an equal second in the clubs Best and Fairest count.
An unfortunate season ending knee injury in the 2007 pre-season saw him sidelined for the year, which no doubt created a big void in the Kangaroos forward setup. Nevertheless, Nathan’s determination and positive attitude has seen him come back in 2008 stronger and better than ever providing the Kangaroos senior line up with valuable leadership in the forward line.
A tall marking forward, Nathan Thompson became a key player in the team kicking 192
goals. His goal kicking ability continued with 135 goals at the Kangaroos in his four
seasons with the club. Nathan was the leading goal kicker for the ‘Roos in 2005.
Nathan officially announced his retirement from the Kangaroos and the AFL Football
League on 19 September 2008.
On 24 December 2008, Nathan decided to come out of retirement to sign with the
Werribee Tigers to play in the 2009 Victorian Football League season.
Nathan Thompson’s success as a footballer is matched by his media ability and is renowned for his
work on Melbourne’s Sunday Footy Show on Channel Nine. Known famously for announcing his battle with depression in 2004, Thompson is an ambassador for beyondblue. Married with three young children, Nathan is a gifted speaker who will share stories of his life on and off the field and his biggest test of all - fatherhood!
Subscribe
© 2022 Platinum Speakers