Nick Farr-Jones is one of our nation’s finest sportsman’s. With a natural ability to lead both world class sports people and execute global business plans, Nick is an engaging speaker bringing his sporting anecdotes and experience into the realms of business life – motivating and driving individuals and teams. 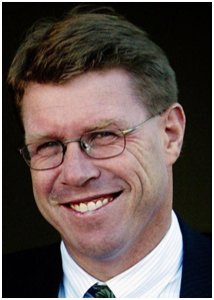 Testimonials for Nick Farr-Jones AM

Nick was superb. Good content, good style and a nice bloke to boot. Everyone loved him, so well done and thanks.

Nick was able to pick up on the brief info I supplied him in the 15 minute conversation I had with him and present content which was meaningful to everyone.
Hewlett Packard, NSW

Nick was brilliant. He was able to take a very detailed brief and run it exactly to plan and keep the dinner running on time. I would highly recommend him as an MC.

Nick was highly entertaining and really took the time to chat to most people at the dinner.

Nick Farr-Jones's ability to appeal to business people on all levels, despite their ages or background is outstanding. A brilliant speaker who can measure any situation and turn it into a success.

Nick was on time, very professional and accommodating to ensure we got the best performance in the ad.

Excellent speaker...charming, funny, intelligent and a pleasure to work with. He had our audience of 500 mostly non-rugby guests in stitches! What more could you want?

The Property Council of Australia

Nick was an engaging presenter who managed to entwine humorous rugby stories with some real lessons for business and life. He had a room of 140 people captivated by the antics and anecdotes of his time in the Australian Rugby side as well as his business and personal life. He was an excellent guest.

Nick Farr-Jones AM travels from NSW
Fee Range: Up to $5000

While still studying law at Sydney University, he was first selected for New South Wales and Australia in 1984. As a scrum-half, and equipped with an accurate, bullet-like pass and outstanding tackling skills, Farr-Jones made his Test debut in November 1984, when he was selected to play against England at Twickenham in London. This was the first of 63 Tests he played between 1984 and 1993. On the 1984 tour, the Wallabies won all four Tests against England, Wales, Ireland and Scotland, thereby becoming the first Australian team to win the challenging 'Grand Slam'.

It was the beginning of great achievements for Farr-Jones. He played in the inaugural Rugby World Cup in 1987, and a year later was named Australian captain.

In rugby circles Farr-Jones was capped for Australia for 10 consecutive years, never being replaced during this time. He captained the team for five of those years including leading the country in 1991 to rugby's holy grail, the Rugby World Cup. His leadership was recognized in being chosen to captain the Barbarian Club to celebrate the famous club's centenary celebrations in 1990 and the World XV during New Zealand's centenary celebrations in 1992. He was awarded an AM in 1992 for services to the game.

During his time with the Wallabies Farr-Jones worked in the mid-sized Sydney legal firm of Garland Seaborn and Abbott. Shortly after sporting retirement he left the legal game pursuing a career in investment banking. He departed for Paris shortly after joining the French investment bank Societe Generale. After four successful years expanding the bank's metal derivative business in Europe and Africa, Farr-Jones returned to Sydney in 1999 to head up the Australian branch of SocGen's commodity finance business developing a highly motivated and well regarded team in the mining and commodity sector.

Farr-Jones left the banking world in 2008 and has taken up non executive directorships of companies largely in the resource sector. In 2009 he joined Taurus Resource Fund which specializes in investing in the mining and resource sector.

Nick is a former Senator of the University of Sydney, Director of NRMA, Councillor of the City of Sydney and Patron of the Children's Leukaemia and Cancer Foundation. He is currently a Director of the Wesley Mission and recently created his own charity known as Touch Life raising awareness and funds to support Wesley’s work in the homeless space.

As someone who led his nation in the last years of amateur rugby, Nick Farr-Jones is a natural leader and, as an amateur sportsman, has uniquely experienced over two decades working in a business environment. He has led both world class sports people but has also been intricately involved in executing global business plans, strategic development and motivating people to achieve, individually and collectively, their objectives and dreams.

Above everything Nick Farr-Jones counts the most successful and satisfying years in life as the daily interaction with his wife Angie and four children. He is an engaging speaker bringing world class sporting anecdotes and experiences into the realms of business life whilst encouraging and motivating individuals and teams.

The Road to the Top

Understanding Process and Letting the Scoreboard Look After Itself

For the Love of the Game

Leadership and Inspiring the Team