Print
Nikki Hudson began her hockey playing career when she was only six years old, simply because her whole family were involved with Hockey. Nikki is a member of the Queensland Scorchers Team, and her preferred position is as a Forward. She made... 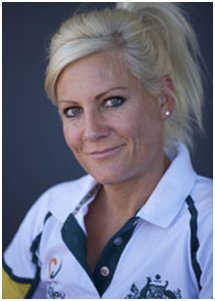 Nikki Hudson began her hockey playing career when she was only six years old, simply because her whole family were involved with Hockey. Nikki is a member of the Queensland Scorchers Team, and her preferred position is as a Forward. She made her debut with the Australian Senior Team as a seventeen year old, playing in lead up matches to the Champion's Trophy Tournament in Amsterdam in August 1993.


Her ability to eliminate with speed and her enterprising skills in the circle area can make her a match winner. At times she is dazzling with her artistic work.
In 1995 she won a Gold Medal in the Champion's Trophy in Argentina and in 1996, Nikki became an Olympic Squad Member. Nikki won Gold and Silver medals respectively in the Champions Trophy, in Germany and the 3rd Junior World Cup in Holland. Nikki was selected as Co-Vice Captain of the Gold Medal winning World Cup Team in 1998.
In the year 2000, Nikki Hudson won a Gold Medal in the Olympics in Sydney and at the 2004 Olympics in Athens Australia came 5th. She played in the Beijing games where Australia finished a disappointing 5th again.
Between being a phenomenal three-time Olympic athlete and being named one of the top five Sexiest Sportswomen in Australian Sport in 2003, Nikki Hudson's presence adds invigoration and excitement to any event. She is a passionate and persevering athlete who has achieved the ultimate athletic goal an Olympic gold medal; which she won in the 2000 Sydney Olympic Games. In addition to her Olympic Gold, Nikki has been the champion of the Commonwealth Games twice and has won gold at several World Cup events as well. Through her success, Nikki Hudson has worked her way up to be the leader of her team; a challenging but highly enriching role. Nikki Hudson played 303 internationals, scored 99 goals and she is the only Hockeyroo to break the 300-game barrier and in March 2009 announced her retirement.
Nikki Hudson is a confident and captivating motivational speaker and has a lot of experience speaking to corporate audiences. Talented and charming, Nikki will light up your audience making your event an enormous hit.
Subscribe
© 2022 Platinum Speakers