Between being an author, working as a consultant in the oil & gas industry, shooting an ongoing television series for National Geographic, motorcycle adventures, hilarious storyteller, Paul has a brilliantly energetic “take no prisoners” approach to life. 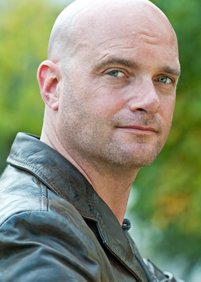 “Paul is a genuinely vivacious and funny guy. He was our keynote speaker at a recent Charity Ball. the purpose of our night was to celebrate the spirit and courage it takes to live life to the full. Paul could not have been a more perfect choice. He started to a sombre crowd who had just heard from the recipient of our charitable focus. Within a minute Paul had everyone in stitches. he engaged with the room of 550 guests like it was a room of 5. He is a magician at story telling and you can't help but giggle uncontrollably as he recounts the unique situations he has tangled himself in. He was a pleasure to work with and I hope our paths will cross again."
Danielle Bolton, Secretariat - Environment Institute of Australia and New Zealand

"Paul Carter was hilarious, he talked for an hour to the cream of the industry regaling tales of his adventures drilling for oil & gas. Paul was the after dinner speaker at Australia's largest oil & gas industry event AOG (Australasian Oil & Gas Exhibition & Conference) in 2009. He was so entertaining, in fact I saw people crying with laughter."
Bill Hare, AOG Event Director

"Paul Carter is the perfect writers' festival guest - a wonderful storyteller with an abundance of un-redictable stories and an ability to charm, engage, surprise and entertain in equal measure."
Sharon Flindell, CEO - Writing WA

Paul Carter travels from WA
Fee Range: Up to $5000

Twenty years in the making, this story teller has three international bestselling books and has amassed over 2 million book sales world-wide.

Author and oil rig worker Paul Carter, has a brilliantly energetic 'take no prisoners' approach to life. His adventures have placed him in some of the world's most remote, wild and volatile places as a contractor in the oil business. So far he's lived to tell the tales of his larikan antics from the edge of civilisation and oftentimes, reason.

Born in the UK, Paul lived in quite a rough part of Aberdeen, Scotland's oil capital; his neighbourhood was on occasion like a wet version of Beirut. Most of the kids he hung around with were not the academic type, neither was Paul, in fact by the time he and his mates had all grown up, anyone who wasn't drug addicted, hadn't been charged with assault or done serious time, was considered a high achiever.

At the age of 15, Paul moved to Perth with his mum who had secured employment working for an American oil company. This move was to change Paul's life in so many ways.

By the time Paul was 16, he was working on drilling tools (thanks to his mother getting him his first job). At 18, he moved to land rigs and then offshore overseas in third world countries at the age of 23. These formative years were spent largely trying not to get killed during a coup, Jihad, up-rising, insurrection or flat out war, all in the name of hydro-carbons.

In 2001 Paul was issued a seven year drilling assignment in Northern Russia. Securing that work post 9/11 involved a long and convoluted psychiatric evaluation that Paul promptly failed. He appealed and a subsequent re-evaluation saw Paul pass. This was largely as a result of a very amusing letter he wrote in his defence. This letter was later sent to a friend in Sydney (just for a laugh), who in turn sent it to another friend who works in publishing and he was offered his first book deal with Allen and Unwin.

Paul has worked, been in serious trouble and given several big talking's to in locations as far flung as the North Sea, Middle East, Borneo and Tunisia, as exotic as Sumatra, Vietnam and Thailand and as flat out dangerous as Afganistan, Russia and Nigeria. He survived all this with his crew, some of the maddest, baddest and strangest people you could hope not to meet. His career highlights include being locked in the toilet by his own monkey, dysentery on a commerical airliner, getting shot at and RPG'd in Columbia (subsequently crying), setting a land speed record on a motorcycle that runs on used cooking oil and being the first rider to circumnavigate Australia on a motorcycle that runs on used cooking oil.

Twenty years in the making, this story teller has four best selling books and has sold over 2 million copies worldwide, about his remarkable career and he is currently working on a fifth. He has also been published as a contributor in "your Mother Would Be Proud", a collection of scandalous tales of mayhem, mischief and misadventure from a talented group of Australian writers, actors and musicians all the proceeds of which are being donated to charity.

Paul Carter was discovered in 2005 by accident. His works are still on shelves today, now published globally in foreign languages, audio books & e-books. To his credit he remains the same funny, often self deprecating down to earth man, and the nicest alpha male you’ll ever meet.

Today Paul lives in Perth, Western Australia, with his wife, two children, geriatric deaf cat Oswald and three motorcycles. He remains the same funny, down to earth man and the nicest alpha male you'll ever meet. His talks are a fascinating and highly entertaining journey about a man whose life experiences can be described as almost "Indiana Jones" like. Once you have heard Paul speak, you will never forget him!

Breaking the land speed record on a bio fueled motorbike

20 years on the rigs around the world

Just do it! Embrace change, adversity and resilience