Print
Paul Hockey became the first disabled person to stand on the summit of Mount Everest from the North side. Paul delivers his powerful presentation 'A handful of spirit'. He talks about “impossible only being opinion and never fact” and “how it is attitude and not aptitude that ultimately determines our altitude". 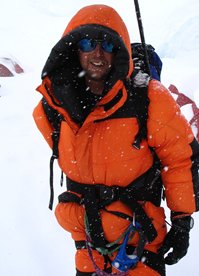 Paul was a sensation. He interpreted the brief with no additional guidance and delivered a presentation in each instance that was well above our expectations. The reaction from our audience was overwhelming and Paul’s presentation has enhanced the relationship TOWER now has with each of the attendees at this session.
Tower Australia Limited

Paul’s story is inspirational and should be heard by as many Australians as possible. His inborn attributes of courage, vision, enthusiasm and endurance can be of immense benefit to us all.
Queensland Rail

The most inspiring person I have ever met. A man who has achieved the ultimate goal, the persistence, the courage just had me in awe of the mental strength that was required. Tells his story in a way that has you smiling or shaking your head in amazement. A great Australian.
Commonwealth Bank

All feedback has been excellent. He was definitely the right speaker for our audience and everyone has really taken in his presentation and experience. He was a real inspiration to them.
Protiviti

He is a very inspiring unique man with an amazing story and one that will live in the audience’s memory for a life time. He was perfect for the occasion.
Provet
Paul Hockey travels from QLD
Fee Range: Up to $5000

One man. One arm. His story.

Paul Hockey a.k.a. the one armed boxer holds three black belts in Martial Arts and is the first person in the world with a disability to climb the treacherous North side of Mount Everest.

On June the 5th 2005 Paul Hockey made history by being the first disabled person to stand on the summit of Mount Everest climbing from the North side. Paul speaks sincerely, passionately and from the heart in spreading his core message, seven simple words: "Never give up. Never ever give up!" A cancer survivor who overcame incredible odds, Paul Hockey’s self belief and persistence has had him labelled as Australia’s answer to Lance Armstrong.

Having lost his right arm to cancer when he was just three weeks old and also his mother, father, stepfather and an Aunty to this insidious disease, Paul was motivated to raise money for cancer research. Paul Hockey’s determination was obvious early on, when he studied various Martial Arts aged just eight. He now has three black belts in two different styles of Martial Art.

He spent three years teaching English in Japan and 12 years as a Japanese speaking tour guide.

Paul Hockey’s first attempt at climbing Everest was dramatically cut short 200 metres from the summit when he ran out of time and oxygen. Returning a year later, Paul released his dream and reached the summit of Everest. Paul Hockey has also climbed in New Zealand and South America. He’s climbed Mt Aconcagua, the highest mountain in the Southern Hemisphere.

As a corporate conference and after dinner speaker, Paul Hockey’s inspiring, passionate and entertaining story of self belief and persistence against the odds resonates with his audience desire to achieve their best.

It is Paul Hockey’s belief that not only can people with disabilities rise to the greatest heights and realise their dreams, they can also help their peers discover the power and freedom of participation in sport and recreational activities.

Paul delivers his powerful presentation 'A handful of spirit' and throughout it describes what he has done, why he has done it and how. He talks about “impossible only being opinion and never fact” and “how it is attitude and not aptitude that ultimately determines our altitude".

Captivating, Inspirational, Motivating, Unbelievable, Entertaining and at times hilarious. Like no one else, Paul Hockey’s impact on his audience is remembered forever.

'A handful of spirit'

Motivation - How to develop a positive attitude using a wide range of philosophies and techniques. Paul will take your audience to death's door and back using his climbs (in particular, his attempts on Mt Everest) as the model.

Inspiration - Using his life experiences as a martial arts expert and mountain climber, Paul has inspired thousands to "get up and into it." Impossible is just an opinion, not a fact. Paul lives by his motto, which is "Never give up...never ever give up!"

Adventure/ Outdoor - Paul spent 12 years with Japanese tourists snorkelling, diving, bungee jumping, rafting, skydiving and hiking. He has climbed in the NZ Alps, the Andes and the Himalayas. Corporate groups often implement programs using Paul's philosophies and his summiting of Everest as their simulated model.

Disability - Paul has never considered himself disabled. He believes that not only can people with disabilities rise to the greatest heights and realise their dreams, they can also help their peers discover the power and freedom of participation in sport and recreational activities. He is also in a position to help the able-bodied better understand the disabled.