Print
Paul Smith is the Founder and was CEO of Repucom, a company that began in Sydney in 2004. Repucom has gone on to become the global leader in sports marketing research and consulting. 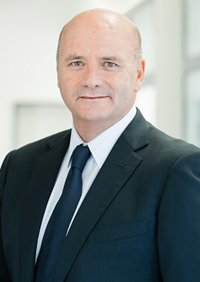 Paul Smith is the Founder and was CEO of Repucom, a company that began in Sydney in 2004. Repucom has gone on to become the global leader in sports marketing research and consulting. In 2016, just 12 years from inception, Repucom was sold to The Nielsen Company, the largest research agency in the world - a transaction that recognised the business acumen Repucom’s CEO and the company’s worldwide dominance in the field of sport.

It is an extraordinary story that started with Paul’s schooling in Warilla just south of Wollongong and by 2010 he found himself working comfortably in boardrooms of some of the biggest sporting enterprises in the world… a long way for a boy from Warilla.

Paul created a global enterprise that was the gold standard in sports, with over 1600 staff in 16 countries, an incredible client list and an amazing set of lessons along the way. It is the lessons learnt and the secrets for success that Paul discovered that make him a compelling and powerful speaker.

Paul’s hard earned lessons and experiences in risk taking, revenue growth, capital raising, opening businesses in expansion markets, acquisitions, building a team of people that could do amazing things and creating a culture of success are the things that Paul is passionate about in business.

Crown Resorts chairman Robert Rankin, described Paul as the "classic entrepreneur who had the persistence to stick with the roll-out strategy, that took more time due to the GFC, but he adjusted and emerged so well. I give him enormous credit for what he has done".

The corporate world can learn much from the experience of a globally successful Australian entrepreneur.  Paul Smith will excite, motivate and energize individuals and companies to be better.

Paul is married with two children.

Whilst Paul tailors his speeches for each individual client, some suggested speaking themes include:

Business development in a global market- the pitfalls and highlights from an Australian success story (discussion on the importance of a clear vision, a cunning plan and a winning strategy)

To be the best in the World you must have team buy in - the Repucom story. (a discussion on leadership  and what it takes to develop a winning culture)

From start up to a global number one - you have to have sense of humour! (a more light hearted after dinner speech style).

To survive in the 21st Century business resilience is no longer an option but a foundation.

Overcoming the tyranny of distance - Repucom's experiences in leading a coordinated team across several continents and instilling a winning culture in all.

It’s a Long Way to the Top from Warilla!!