Print
Peter Alexander is an inspirational entrepreneur who has spent over 30 years building his successful brand. Peter is the founder of Peter Alexander Sleepwear, a brand that has grown enormously and developed into a multi channel business with over 25 retail stores! A believer, an inspiration, and a humble person, Peter shares his journey of success. 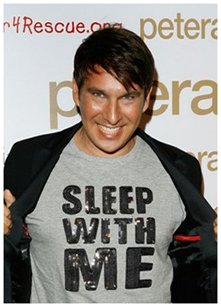 Peter was a brilliant speaker and the audience bonded with him. He was funny and entertaining but also spoke of the potential disasters that were averted and became learning curves. I had spoken with Peter prior to his speaking engagement, requesting that he tell his story "warts and all" which he did on a level that resonated with the audience. Question and answer time was the longest in our Business Week history, perhaps it was the pair of Peter Alexander pyjamas that Peter bought along for the "most unusual question he has been asked!" Following his talk, Peter was mobbed like a movie star, I'm sure he thought he would never get out of the Karralyka Centre.
Maroondah City Council

Peter Alexander is an inspirational entrepreneur who has spent over 30 years building his successful brand. Peter is the founder of Peter Alexander Sleepwear, a brand that has grown enormously and developed into a multi channel business with over 25 retail stores! A believer, an inspiration, and a humble person, Peter shares his journey of success.

At age 24, Peter decided it was time to be his own boss. When his female friends were unable to find comfortable women's pyjamas that weren't matronly styles, he decided to get into the pyjama game.

Working from his Mother's dining room table Peter began making women's pyjamas selling to department stores. When the phone rang, to make the business seem bigger Peter and his Mum would pretend to be someone else!

When a department store cancelled an order for 2,000 pairs of pyjamas, Peter turned his biggest set back into an opportunity. He then put a mail order advertisement in a popular women's magazine and the response was overwhelming. Peter was flooded with 6,000 orders from one ad and since then he hasn't looked back!

Following this success the business started to grow and attract media attention. Peter was dubbed the 'Pyjama King' by the Australian Media and the nickname has stuck to this day!

His humorous, quirky and playful personality shines through in every collection. Each new collection has a unique theme and is inspired either by Peter's travels around the world, from Paris & New York to African Safaris or exciting design collaborations with Disney and Sesame Street just to name a few.

Peter was always an animal lover, even from a young age. But it was Penny who ignited Peter's passion for animal welfare. Peter is an ambassador for the RSPCA, constantly thinking of ways to raise money and awareness to help all creatures great and small. One day he walked past an adorable little dachshund puppy in need of home. That was the day he found Penny who grew to become the beloved and iconic logo of the brand. As you walk through the pink doors today, you will see Penny almost everywhere, from the pyjamas to the gift packaging and even Penny dog shaped door handles!

Over the last 34 years, Peter Alexander Sleepwear has grown with leaps and bounds from a pure catalogue based business to a multi-channel business with over 140 retail stores across Australia and New Zealand.

Peter Alexander remains the Creative Director of the brand.

Believing in the importance of setting high goals, Peter says people with high goals have far more chance of achieving them, than people with lower goals or no goals at all.

Many people write off Peter Alexander as a person with no fashion experience, a learning disability, and no university education who somehow managed to turn a $3,000 loan from his father into a retail empire that now turns over around $350M in annual revenue.

But how did he achieve all that? And how has he survived over 35 years in business?

In his presentations, Peter shares the unconventional lessons he has learned through his experience of building Peter Alexander into what it is today.

His story may amuse and scare audiences, but it is guaranteed to inspire audiences to challenge the status quo and give insights into what it takes to build a 9-figure business in the world we live in today