Born in Sudan, Peter Bol and his family fled the civil war, spending four years in Egypt.   Inspirational Australia's 800 metres runner Peter Bol raced three times in Tokyo for two PBs, two Australian records and an Olympic final. Peter became the first Australian in 53 years to qualify for the Men’s 800m Final on the track in which he finished fourth in an exciting and inspirational race. 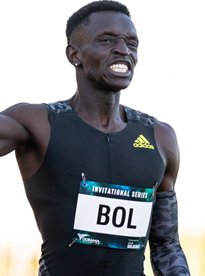 Peter had the students and staff members completely engaged throughout his presentation. His stories are inspiring, and he connects so well to his audience. Usually when it comes to Q + A’s, the students can be a bit shy. Not on this occasion! To see so many teenagers raising their hands, asking meaningful questions relating to goal setting, resilience, mental health, and sports psychology was awesome to witness. I’d highly recommend Peter to any school or corporate business seeking an exceptional public speaker.

We were privileged to have Peter as guest speaker at our end of year celebration function. Peter captivated our audience with his inspirational story and words of wisdom. His sense of humour and valuable life lessons motivated all in the room to use his 4 tools to reach one’s goals. We look forward to having you speak to us again!

Peter Bol has been involved with the Victorian Institute of Sport’s (VIS) Community Programs from 2016 to 2020 and during that period has been one of the most popular speakers and VIS facility tour guides. Peter has a fantastic story to share along with a great personality and charisma that his audience is drawn towards. He has a way of relating to all the groups he has worked with here at the VIS, from primary school students, secondary students to international university students or corporations. It doesn’t matter what group he speaks to, he has a way of connecting with them. Since joining the VIS Community Programs in 2016, he has grown in confidence and competence, to the stage where he was able to host the VIS TV sessions at our Awards of Excellence. Coming to Australia as a refugee from South Sudan, Peter demonstrates resilience and overcoming adversity. Everyone can learn something from his story and I would definitely recommend him as your next guest speaker.

Australia's 800 metres runner Peter Bol raced three times in Tokyo for two PBs, two Australian records and an Olympic final. Peter became the first Australian in 53 years to qualify for the Men’s 800m Final on the track in which he finished fourth in an exciting and inspirational race.

At the age of 10 he stepped off a plane in Toowoomba; an experience that Peter describes as indescribable and comparable only to qualifying for the Olympic Games.

Ambitious and passionate about helping others, Peter is a mentor, coach and educator - with a focus on the importance of consistent actions.

Peter finds great value in exploring the concept of home- sharing all the emotions and observations that come with his experiences as a Sudanese Australian.

In 2016, Peter wore our national colours - the green and gold as he faced the immensely difficult task of competing at his first Olympic Games in Rio.

Fellow, champion athlete and decorated Paralympian, Kurt Fearnley: "Peter Bol. Take a bow." Ex-Socceroo and humanitarian, Craig Foster: "All of Australia loves Peter Bol. Peter's entire life is about courage." Ex-opposition leader, Bill Shorten, has been Peter Bol's literal running mate and had this to say: "Peter Bol, what a legend. It's been a privilege to know him."

"I didn't know if I was going to win,  but I knew one thing for certain, that the whole of Australia was watching and that carried  me on"

Never has a competitor who came fourth in an extraordinary Olympic final fired the  imagination of so many people, but then Peter Bol is no ordinary athlete; he is so much  more and Australia looks forward to much more of Peter Bol.

There are no "overnight sensations". Dig deep into the history of anyone who appears to  have shot to stardom and you'll find a CV of hard work, tenacity, failure, success, setbacks,  further attempts, trials and tests before all of these conspire to throw someone into the  spotlight they've been orbiting. This is Peter Bol's narrative too and he could not hide from  the glaring light of achievement, over three nights at the Tokyo Olympic Games in the Japan  National Stadium in Shinjuku.

Peter’s inspirational Olympic journey - Born in Sudan, Peter Bol and his family fled the civil war, spending four years in Egypt. At the age of 10 he stepped off a plane in Toowoomba; an experience that Peter describes as indescribable and comparable only to qualifying for the Olympic Games.

Diversity & Inclusion - Close to his heart, Peter is a proud Australian working to improve the diversity and inclusion of this country. Fleeing Civil War in Sudan to make it as an Australian Olympian, there have been many lessons learnt along his journey to help others better understand the experience and perspectives of minority groups in Australia. Better yet, Peter can talk about the benefits of diverse teams for optimal performance

Peak Performance - From his success as a junior champion, to the work needed to reach two Olympic Games, Peter has much to say on high performance. Peter shares key ingredients, which involve mental and physical strength, to perform optimally and win. This recipe can be tied to a corporate, schooling or team environment.

Leadership - Good leadership breeds good results both on and off the track. Peter has worked with schools, sporting groups and corporate teams to identify what makes an inspiring leader that helps their peers shine.