Print
hosting George Burns, Warren Mitchell or Sylvester Stallone. Peter Kaye is one of Australia's most talented and popular performers at leading corporate functions throughout Australia with his unique comedy impersonations of famous... 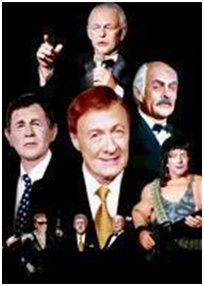 Peter Kaye travels from NSW
Fee Range: Up to $5000

hosting George Burns, Warren Mitchell or Sylvester Stallone.
Peter Kaye is one of Australia's most talented and popular performers at leading corporate functions throughout Australia with his unique comedy impersonations of famous entertainers and political figures. In fact, he has been MO Awards winner Australia's Best Variety Entertainer for three years in succession.
With the aid of his specially made life-like latex rubber masks, Peter not only uncannily sounds like his characters, but also looks like them.
Peter presents some of the world's most famous International Personalities in a fast moving, quick changing, hilarious cabaret show. Each character appears like magic before your eyes as he changes his appearance, voice and mannerisms from Boris Yeltsin to George W Bush, Juan Antonio, Samaranch, Lieutenant Columbo (Peter Falk), Sean Connery, Rambo, Frank Sinatra, George Burns and Pavarotti, just some of Peter's international characters.
A world leader in his art, Peter is also a talented actor, singer, song writer - all of which have been put to good use in his major appearances on stage and television throughout the world. Among his extensive credits wee five appearances at the famous London Palladium, three years in London's West End with The Black and White Minstrel Show, London Palladium tour of Canada and tours of The Hilton Hotels with such stars as Jack Jones and Dionne Warwick.
Peter has captured the imagination of millions with his life-like portrayals of popular characters. He is a performer like no other. Next time you bump into George Burns - think twice - it could be that master of disguise, PETER KAYE!!
Peter can do up to ten characters in half an hour.
Subscribe
© 2022 Platinum Speakers