Pete’s an inspiring powerhouse of game-changing creative thought, certain to shake up and wake up any speaking event. 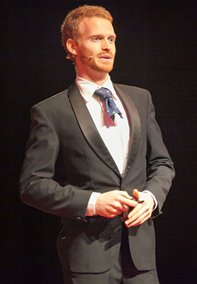 Peter was great to work with. He has a great energy and had the audience captivated with his talk.

Engaged and inspired our students.

Peter is an inspiring leader and compelling storyteller with a magnetic and engaging personality. He leads movements that connect people to their shared humanity. At TEDxPerth, his message of human connection moved the audience to both tears and laughter. His performance transformed attendees into participants and the event into an impromptu dance party. Peter promotes social harmony by erasing the barriers that separate us - he acts as a catalyst for people to connect meaningfully with one another. He is an excellent choice where strong community organising skills are required, or where inspiring action, recognising our shared humanity or disrupting social convention are themes.

His viral videos of the global happenings have gone on to receive more than 100 million views world-wide and he recently received a “Dancing Ovation” whilst presenting his findings at TEDx Perth.

Fiercely optimistic, Peter combines his heart-warming life stories with explosive insight that is relevant to all businesses & inspires authentic trust & human connection to flourish in the workplace. He passionately speaks to audiences around the world about becoming the change they wish to see and the way simple shifts in perspective can lead to powerful influence.

After living and working in The Netherlands & Spain he decided to hitch-hike 1500km’s solo in a business suit from Barcelona to Croatia, during his journey into the unknown, Peter uncovered the life changing benefits of being true to himself and his core values. He came back feeling more capable than ever and went on to start two social movements for peace that have both inspired global change and is now currently working with the City of Perth to build city infrastructure to encourage human connection in public spaces.

Pete’s an inspiring powerhouse of game-changing creative thought, certain to shake up and wake up any speaking event.

Daring to be vulnerable

Self acceptance in a modern world

The Power of Human Connection

Life Outside the Comfort Zone

How to Start a Movement