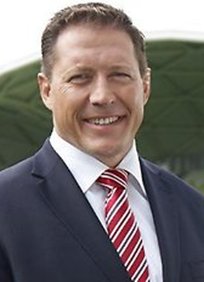 Phil Kearns was the guest speaker at the Carbine Club of WA Rugby Luncheon held in Perth on the eve of the Wallabies vs. Fiji Test Match played on the 9th June 2007. The Luncheon was attended by some 250 business and sporting people and was an outstanding success due largely to the excellent presentation by Phil...Phil's 45 minute talk was presented in a professional, informative and humorous fashion. He received and responded to numerous questions during a 20 minute question time. The Carbine Club received many positive comments relating to Phil's presentation and I would have no hesitation in recommending Phil as a guest speaker for future sporting/business functions.

Phil was fantastic. He touched all of the key points that we had spoken about and was very engaging and entertaining. He was very well received by those that attended the event.

Acknowledged by many rugby commentators as having been the world’s best rugby hooker, Phil debuted in 1989 and played 67 test matches for Australia, captaining 10. He also played in the ‘Rest of the World’ side against the All Blacks for the New Zealand Rugby Centenary celebrations. Phil capped off his rugby career by playing an important part in the Wallabies World Cup win in 1999, the third world cup campaign for Phil.

Phil’s great ability as a player coupled with his leadership skills, both on and off the field, was recognised through his appointment as captain of the Wallabies on ten occasions throughout his career. A tenacious competitor, Phil epitomised the new breed of Australian sportsmen displaying remarkable talent, ability and determination. Despite setting himself exceptionally high standards in all of his pursuits, Phil remained throughout his playing career, the consummate team member. His candid wit and outgoing personality made him popular with team mates, supporters, media and even opponents. This popularity has continued through his media and other charitable commitments.

Phil was appointed as CEO of Centric Wealth from 2011 to 2014 by CHAMP Private Equity to manage the turn around of the company before its sale. He is now the CEO of insurance broker InterRISK.

Based on a combination of his sporting achievements, personal qualities and his articulate presentation skills, Phil is a highly sought after public speaker and spokesperson for any company or product and has been a prized member of the Fox Sports commentary team since 2001.

Outside of work, Phil is an avid family man with four young children that keep both him and his wife, Julie, on the run. He also maintains commitments with numerous charities including his role as the creator of The Balmoral Burn, an annual charity run up one of Sydney’s steepest streets raising funds for children’s services donor the Humpty Dumpty Foundation. To top it off, Phil has raced the Sydney to Hobart three times.