Following a successful NRL career Preston Campbell is a popular indigenous ambassador and voice for mental health and those suffering depression after stepping forward to share his own personal experiences. 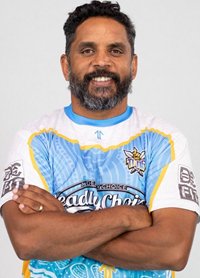 Following a successful NRL career Preston Campbell is a popular indigenous ambassador and voice for mental health and those suffering depression after stepping forward to share his own personal experiences.

Preston Campbell retired in 2011 after playing a staggering 267 NRL first grade games. Throughout his football years, Campbell has been part of Premiership winning team, was awarded the Dally M Player of the Year, received the Ken Stephen Medal in 2008 and was the 2011 NAIDOC’s Aboriginal sports star of the year.

Campbell started his rugby league career with the Inverell Hawks Junior Club and made his NRL debut with the Gold Coast Chargers in 1998 as fullback. Since then he has played for the Cronulla Sharks, Penrith Panthers and the Gold Coast Titans.

Campbell ended his career deciding to focus on community work and life after football. “I feel like it’s time for me to start the next phase of my life off the field,” Campbell said. “I could have gone another year but I want to concentrate more on what I’m going to be doing after footy here at the Titans”.

Since retiring Campbell has become one of Australia’s most influential sporting ambassadors, working tirelessly in the community as an Ambassador for the Gold Coast Titans and One Community, focusing on improving indigenous wellbeing and health.

Preston speaks openly about mental health and his own experiences of depression. Preston mentioned only recently "That's why I put my hand up to share my story, in the hope that people would come forward and say, 'Hey, that's what's going on with me.'"