Print
'Success is a choice' - Priya Cooper OAM is an extraordinary athlete who has not let cerebral palsy stop her from achieving all her life goals. A record-breaking swimmer, she has won multiple medals at national and international competition level. 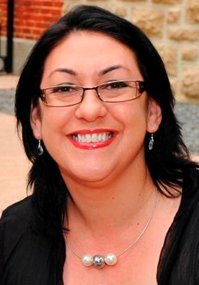 "It is the first time in the years I have been involved in the Association that I have seen a guest speaker receive a standing ovation at our annual state conference. Priya received two. She made members laugh, she made them cry and she challenged them. She was truly inspirational. We thank her for being what she is and wish her well."

"Our guests found Priya totally inspirational. She radiates warmth and has the audience in the palm of her hand very quickly. Fantastic speaker."

"Priya was fantastic. Everyone in the audience walked away feeling positive and inspired and could relate Priya's message to their own lives."

"Absolutely fantastic! Set the mood for the conference. Very engaging and full of life, fun and energy. Excellent speaker."

Excellent. Great down to earth presentation which linked well with our theme of achievement for the day. Great personality and rapport building ability.

Priya’s presentation for our annual state conference was sincere, inspirational, fresh, enlightening, fun and set a great tone for the day.

Priya Cooper OAM travels from WA
Fee Range: Up to $5000

Priya Cooper OAM is an extraordinary athlete who has not let cerebral palsy stop her from achieving all her life goals. A record-breaking swimmer, she has won multiple medals at national and international competition level. Hailing from Perth Priya began swimming at a young age for therapy and later realised her potential as a competitor. It was not until 1991, whilst competing at a school carnival, she was approached to represent Western Australia. Priya competed for the first time in the National Wheelchair Games winning a staggering nine gold medals.

With the hours of long, hard training Priya Cooper went from success to success, winning 3 gold and 2 silver medals, and breaking two world records and three Paralympic records at the Barcelona Paralympics in 1992. This was her first international competition. Priya won the most medals of any Australian athlete at the Games, and as a result was given the honour of carrying the flag for Australia at the closing ceremony. On arriving back in Australia she was awarded an Order of Australia Medal for her services to sport, and became an Australia Day Ambassador.

Priya Cooper then set her sights on the World Swimming Championships in Malta in 1994. Priya competed in five events, won 5 gold medals and set 4 world records as well as captaining the Australian team.

In 1988 Priya competed in the British National Swimming Championships and won 4 gold medals, a bronze medal, and set a world record. In 1999 Priya Cooper was named Young Australian of the Year for Sport, winning the award over other major sporting stars such as Pat Rafter and Ian Thorpe who were also finalists in the Sports category of this prestigious award.


Priya spent almost two years in Sydney prior to Sydney 2000 Paralympics to concentrate on her training and lifelong goal of winning gold for her country, in her country, at the Sydney 2000 Paralympics. Despite recovering from major shoulder surgery, Priya achieved her aim and in October 2000 won a gold medal in the 400m Freestyle and three bronze medals in other events.

Priya Cooper has a degree in Health Promotion and Journalism from Curtin University of W.A, and in 2015 she was inaugurated to the Sports Australia Hall of Fame alongside Ricky Ponting and Casey Stoner.

Priya has in 2017 achieved the role of Deputy Chair of the Disability Services Commission.

She has addressed major corporate and government conferences and events and she is an excellent motivational speaker whose presentation titled ‘Success is A Choice’ reminds us that any dream, large or small, personal or corporate, can come true with the strength of sheer determination. Her presentation often elicits standing ovations from audiences.

Success is a Choice