Print
Economics icon Professor Ian Harper has held positions in the top eschilons of Australian commerce, government and academia. He has the rare talent to deliver dry and sobering content with a most humorous and entertaining candour. As a member of the celebrated 'Wallis Inquiry', Professor Harper was at the forefront of financial market reform in Australia. 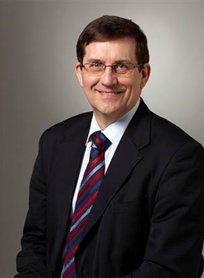 “I thought Ian Harper was excellent. with my Finance & Corporate Governance background, I felt that the total presentation was rewarding. Running a Deli these days or any retail business for that matter is very challenging with the likes of Coles and Woolworths at "war" with products and price. Nevertheless, I will pursue 'The Challenge of Change' much better prepared."
Tony Sama, Director - Sagamara Pty Ltd

Ian's academic career launched after he graduated from the University of Queensland with Honours for a Bachelor of Economics, then a Masters of Economics and Doctorate of Philosophy from the Australian National University.

Having completed his studies, Ian moved to Sydney where he joined the Reserve Bank of Australia's (RBA) economic research division. He describes the experience as "perspective broadening" as the focus was very much on macro-economics.

Ian returned to academia after two years at the RBA, becoming a Senior Lecturer at ANU. He retained his interest in financial market policy however, and this proved to be valuable in his appointment to the Wallis Inquiry into Australia's financial systems (1996 - 1997).

Ian moved to Melbourne in 1998 and spent four years as a Commerce Professor at Melbourne University before moving to the Melbourne Business School where he lectured for 16 years and held the Sidney Myer Chair of Commerce & Business Administration. From March to November 2004, he serves as Acting Dean and Director of the School. He was elected Emeritus Professor on his departure from the University of melbourne in recogntion of his service. Ian is also a Fellow of the Academy of Social Sciences in Australia, and of the Australian Institute of Company Directors.

From 2005 to 2009, Ian was the inaugural Chairman of the Australian Fair Pay Commission, prior to it being abolished and replaced with Fair Work Australia. The role of the commission was to set and adjust the minimum rates of pay for Australia's lowest paid employees.

Ian then became a Director at Access Economics and later a Partner when the company was sold to Deloitte. He's also on a four-person Advisory Board established by the Bank of America Merrill Lynch in Australia.

From January 2011 to February 2012, Ian was appointed by the Baillieu government to serve as one of the three panellists on the Independent Review of State Finances in Victoria.

Ian is Principal of his own consulting company, Harper Associates Australia; a Senior Consultant with Access Economics and a senior adviser to Aon Australia. In addition to his work in business, government and academia, Ian has also published numerous articles and he wrote the book 'Economics for Life' which won the 2011 SPCK Australian Christian Book of the Year Award.

Ian is sought after as a commentator and public speaker on economic and financial issues. He works at the interface of business, public policy and academia and has a recognised capacity to absorb, analyse and interpret complex economic data. Described as "one of those relatively rare academics who can communicate extremely well with both the business and the academic communities", Ian's presentations are not only accurate, current and scientific, but highly entertaining.

As a trained economist, Ian asks the "what if" questions to help delegates see the "big picture" and anticipate future developments in their own markets and beyond. He understands the imperatives facing government and how they differ from those facing business and assists clients to assess the public policy ramfications of their corporate strategy work using his experiences, insights and high level contacts within the public sector.

A team player, Ian focuses on forging the collective strength of enterprises by providing purpose and direction to make them stronger in the long term. Ian Harper has an excellent ability to articulate ideas, offer alternative perspecitves and generate open group discussions that assist clients and conference delegates to benefit from the collective wisdom of group decision-making.