Print
Professor Harvey-Smith is also a speaker, MC and performer with a passion for communicating science and its real-world outcomes to non-specialists. She was a presenter on the ABC's popular astronomy show Stargazing Live and appeared as a guest physicist on the popular ABC series Todd Sampson's Life on the Line 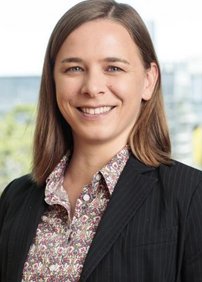 Lisa presented an opening speech at "An evening with Neil deGrasse Tyson", which attracted over 4,000 attendees. The feedback was of utter delight, as Lisa engaged the audience, made them feel excited and really ready to get thinking! Lisa is very confident, knowledgeable about science, has a great sense of humour and is very likeable. We believe she has the capacity to make real change within the area of science and beyond.

Lisa is a force of nature. She’s an explorer, an optimist and a powerful advocate for the role of science and astronomy in society. She’s a role model for aspiring scientists and one of the great storytellers of Australian astronomy.

Thank you so much for a wonderful, entertaining and educational presentation. You have introduced a whole new audience to astronomy who, I am sure, will keep coming back.

Dr. Lisa Harvey-Smith’s talk was extremely well attended and received. Survey respondents gave her a 90.5% excellent rating, which is the best rating for the year (the average is 78%).

Professor Lisa Harvey-Smith is an award-winning astrophysicist, communicator and occasional ultra-marathon runner. Her research uses some of the largest telescopes in the world to study the birth and death of stars, cosmic magnetic fields and interactions between colliding galaxies.

Harvey-Smith was the winner of the Australian Museum’s Eureka Prize for the Promotion of Australian Science Research in 2016 and in 2015 she was a co-recipient of the CSIRO Chairman’s Medal. She was named in The Sydney Morning Herald’s Top 100: Most influential people in 2012.

Harvey-Smith is also a speaker, MC and performer with a passion for communicating science and its real-world outcomes to non-specialists. She was a presenter on the ABC's popular astronomy show Stargazing Live and appeared as a guest physicist on the popular ABC series Todd Sampson's Life on the Line. Lisa hosted a national tour in 2016 with Gene Cernan: Last Man on the Moon at major venues across Australia and has introduced several live shows including Buzz Aldrin: Mission to Mars and An Evening with Neil De Grasse Tyson in Sydney and Melbourne. In February 2015 she presented her own show Stargayzing for Sydney Mardi Gras.

Lisa has appeared on many radio and television platforms including ABC and commercial radio, Sky News Business, ABC Splash, Al Jazeera English, SBS News and ABC News 24. She has written articles for The Conversation and appeared in many national newspapers and magazines. Her article on the SKA features in the popular science book Patrick Moore’s Yearbook of Astronomy 2016.

She is involved in many educational initiatives and outreach programs and regularly mentors students in schools located in Sydney and at Pia Wadjarri, a remote aboriginal community in Western Australia.

Harvey-Smith is an advocate for a level playing-field for everyone working in astronomy. Her work as a former Chair of the Astronomical Society of Australia’s Chapter for Women in Astronomy culminated in the launch of The Pleiades Awards, a national accreditation scheme for employers of astronomers in Australia that take steps towards achieving best practice in equity and diversity.

Lisa regularly stretches her body and mind to the limit, running ultra-marathons including 12-hour, 24-hour and multi-day events. Her feats of endurance include running 168 km (four marathons) in a single day and a completing a 250 km race through the Simpson Desert.

What’s new? The future of technology and data

Prof. Lisa Harvey-Smith is an international expert in astrophysics, big & smart data, supercomputing and new technologies to support the global space industry. She can speak with authority on a broad range of fascinating topics including drones in space, robotics, AI and ethics, backed up by her expertise in these rapidly changing industries. Engage your team in the cutting edge of science, technology and data.

Equity, diversity and inclusion expert and astrophysicist Professor Lisa Harvey-Smith makes the case for inclusion in your workplace. Backed up by hard data and international research, she makes a compelling case for transformational change that will be great for all staff and boost the competitiveness of your business. This talk can be delivered for a general setting (e.g. for all staff, managers or senior leaders) or tailored for your audience on specific topics, e.g. gender, or LGBTQI+ inclusion).

Take a thrilling journey through the past, present and future of our universe. Guided by an award-winning astrophysicist and science communicator, we take non-specialists on a journey through the stars, more than 3 billion years hence, to witness an incredible collision between our galaxy the Milky Way and our neighbour, the Andromeda galaxy. In this engaging presentation audiences gain a new perspective on our connection to the cosmos and what the future may hold for planet earth.