The Hon Bob Carr was a former Foreign Minister of Australia and one of Australia’s most recognisable political leaders who helped elevate Australia’s relations with China achieving a more strategic partnership. For over 10 years he was Premier of New South Wales, the longest continuously serving Premier in New South Wales history. 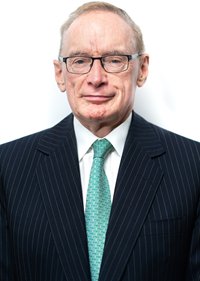 The Hon Bob Carr delivered an informative and thought provoking presentation. Our client ACCA, the event sponsor KPMG and other headline speakers all agreed that he set a high level for the event.

Carr is the most consistently effective, engaging and entertaining speaker with whom I have collaborated.

Both the afternoon event and the awards night went really well. Bob was a great speaker and I know our management team found the meeting with him very valuable.

Mr. Carr is an exceptional speaker with an amazing ability of truly capturing the audience. The presentation was scored as one of the best at the conference.

Carr is a smart speaker, a colourful orator with a carefully trained voice.

There is no doubt Carr is a master orator.

He served as Minister for Planning and Environment 1984 to 1988 and as Leader of the Opposition from 1988 until his election as Premier in March 1995. He was re-elected in 1999 and 2003 securing an historic third four-year term.

He retired from state politics in 2005.

During his 10 years the State Government set new records for spending on infrastructure, became the first government in the State’s history to retire debt, hosted the world’s best Olympics in 2000 and achieved the nation’s best school literacy levels. Forbes magazine called Bob Carr a “dragon slayer” for his landmark tort law reforms.

As Premier he received the World Conservation Union International Parks Merit Award for creating 350 new national parks. He introduced the world’s first carbon trading scheme and curbed the clearing of native vegetation, both anti-greenhouse measures. He was a member of the International Task Force on Climate Change convened by Tony Blair, and was made a life member of the Wilderness Society in 2003.

Bob Carr has received the Fulbright Distinguished Fellow Award Scholarship. He has served as Honorary Scholar of the Australian American Leadership Dialogue. He is the author of Thoughtlines (2002), What Australia Means to Me (2003), My Reading Life (2008) Diary of a Foreign Minister (2014) and Run for Your Life (2018).

In March 2012 he was designated by Prime Minister Julia Gillard as Australia’s Foreign Minister, elected to the Australian Senate to fill a casual Senate vacancy and sworn in to the Senate and Cabinet on March 13, 2012.

As Foreign Minister, Bob Carr fostered stronger relations between Australia and Southeast Asia, lifted sanctions on Myanmar, campaigned for the passage of a global Arms Trade Treaty and led the final stages of Australia’s successful bid for Australia’s seat on the UN Security Council as a non-permanent member. His plan for a Syrian medical pact was backed at the G20. He assisted Prime Minister Gillard in achieving a strategic partnership with China.

Following his resignation from the Senate on October 24, 2013, the University of Technology, Sydney appointed him to lead the Australia-China Relations Institute – a think tank dedicated to Australia-China relations, serving for five years. In May 2019 he was appointed Professor of Industry in Climate and Business at the University of Technology Sydney.

Bob Carr is a Director of The Lysicrates Foundation and a Committee Member of the UNSW Matraville Education Program Advisory Council.

One of Australia's most popular and respected political leaders, Bob Carr made his political reputation through public speaking. "There is no doubt Bob Carr is a master orator," according to Simon Benson, political correspondent of The Daily Telegraph. "Carr is the most consistently effective, engaging and entertaining speaker with whom I have collaborated," writes Graham Freudenberg, Australia's best known political speech writer in his memoir.

For Australia suddenly international relations is deadly serious. American democracy is teetering with Biden a likely one term president and Trump capable of becoming the second in history to serve two non-consecutive terms. China will confirm its status as the world’s biggest economy and the superpower of the Asian region. A more nationalist China on the rise and a US defending its primacy: what are the risks of conflict and where does this leave Australia? Was it inevitable our relations with China would sink as they have since 2017, with us now suffering the worst relationship with China of any US ally? Can the Canberra and Beijing relationship get worse? What would it mean for the Australian economy?

Bob Carr says there are three opportunities that might allow a reset in China-Australian relations. He suggests how this could be rendered acceptable to the United States. He outlines an Australian diplomacy over Taiwan that can help avoid war. He offers ways of managing a pragmatic relationship which serves the national interest without sacrificing our values.

Bob Carr served as Foreign Minister and experienced first-hand the challenge of managing relations with China across the barriers of politics, interests and culture. He visited China and continued to research it for five years as chair of the only think tank devoted to Australia-China relations. He also cultivates a deep interest in American history and politics and has thought as deeply as any Australian about the triangle of relationships: China US Australia, and how it is reshaping our country.


Should Australia go for Nuclear Power

Nuclear Power: does the climate emergency create an opening for nuclear in Australia, a country that generates no electricity from nuclear and has resisted arguments for nuclear power even while exporting uranium yellow cake and committing to nuclear subs? Fukushima cast a shadow but in October 2021 France announced six new power plants to firm up its electricity grid. Large nuclear “new build” power plants in the US, Finland and the UK have encountered delays and cost blowouts but Washington, London, Canada and France are stepping up research into small modular reactors.

Former Premier and Foreign Minister Bob Carr 10 years ago was persuaded we were headed for a nuclear renaissance mainly to beat global warming. He now thinks nuclear has lost the battle with renewables on economics but is open to assessing new small and miniature reactors if they can pass the tests, probably in the 2030s. Dr Adi Paterson is an engineer with nuclear project experience recruited in 2009 to be CEO of Australia’s Nuclear Science and Technology Organisation (ANSTO) and believes Australia should consider fabrication of nuclear fuel and small modular reactors locally to provide firming to intermittent renewables.

We present both men in a compelling discussion of the strengths and weaknesses of the nuclear option- prepared to acknowledge the strengths in the other’s case and vulnerabilities in their own, and to use nuance and data, and even reach common ground. Join us in this uniquely open minded and engaging exchange - more than a debate, a real discussion- between and engineer and politician about whether nuclear power has a future in Australia.

America's Future: How Its Strengths and Weaknesses Affect Your Business

Global Warming - the Most Serious Challenge of our Time

Leadership: An Australian Looks at the Careers of Lincoln and FDR

Lessons For Today From the World's Greatest Leaders

Lessons from the Presidents

The 10 Decisions Australia Got Right

The Australia of 1942 and the Fall of Singapore

The Case for Medical Research

The Roman Empire and its Lessons for Us

The Terrorist Threat: How to Survive as a Business in the New climate