History making humanitarian, author and international keynote speaker Rabia Siddique is a power house for change.  Entertaining, powerful and engaging, this best-selling author represents a living example of how each one of us can be a force for positive change in our own lives and those around us. 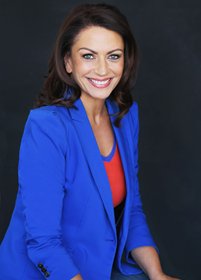 Compelling story, I was riveted for the hour. Rabia is a cool customer and really connected with the Audience"

Rabia is a truly interesting and engaging speaker. Her personal and professional achievements are extraordinary and an inspiration for young women everywhere. In my view, Rabia's unique experiences as a Legal Officer in the British Army, and the courage and determination she showed in fighting to achieve equal treatment irrespective of her gender, should be shared widely. Rabia provides a powerful example of what an individual can do to fight for equality and ensure that discrimination, in all of its forms, is eradicated.

Rabia was a speaker at our “Women in Leadership” Breakfast held in February 2013. Her talk was entitled “Striving and Surviving”. We heard about the courageous role Rabia played by resolving a hostage crisis in Iraq and surviving being taken captive by terrorists and suing the British military in a case that made international headlines. Her talk was very well received and generated a number of questions from interested members. We can highly recommend Rabia as a public speaker.

Rabia’s presentation was well researched, and eloquently delivered, with humour and emotion and the message she delivered was clear and engrossing, receiving many positive comments from our guests. The courage she has shown in her tenacity and fortitude in her pursuit for justice and equal rights for women is admirable, and women in particular will benefit from her experiences which show the female gender should not be silenced in the face of adversity and lack of fairness.

She has undertaken humanitarian aid work in Asia, South America, Europe and the Middle East, for which she was decorated by Queen Elizabeth II.

Having survived a hostage crisis in Iraq in 2005 Rabia sued the British Government for discrimination when both the military and government tried to cover up her involvement in the incident, which saw her leading hostage negotiations for the release of two British Special Forces illegally kidnapped and detained by Iraqi based terrorists.  Rabia was held hostage for over eight hours and subjected to cruel and unusual treatment in front of her male colleagues. After their eventual rescue Rabia’s colleagues were recognised, psychologically supported and decorated for their efforts and bravery, however Rabia was gagged, ignored and ordered to never speak of the role she played on that fateful day where she almost lost her life.

As a result of her betrayal at the hands of her military superiors and the then Prime Minister of Great Britain Rabia was diagnosed with PTSD and after her recovery she held both the British Army and Government to account for their systematic discrimination of women and ethnic minorities.  Her landmark case made international news and saw the floodgates open for many similar cases.  It heralded profound changes in defence and public policy, attitudes and the support offered to female soldiers serving on the frontline, ethnic minorities and military personnel suffering with PTSD.

Rabia’s best selling memoir “Equal Justice: My Journey as a Woman, a Soldier and a Muslim” was published by Pan MacMillan in 2013 and work is currently underway to adapt this to a movie.  She is currently writing her second book “A Beautiful Revolution”, a book about the power we all have to be the change in our lives and in the world around us.

Rabia is now a multi award winning story teller, inspirational speaker, leadership consultant, media commentator and human rights advocate. Peace and the sustainability of our planet is what drives her.

But her biggest challenge and joy is being a mother to her young triplet boys!

An unforgettable presentation ideal for a wide audience who aspire to be truly great leaders.

Rabia uses her unique and powerful story as a starting point, and by sharing her truths and vulnerabilities with the audience, Rabia explores what it means to be a truly great and authentic leader. She addresses what she believes are the essential qualities and key roles for a great and effective leader. She calls her audience to a higher purpose, challenging them to practice and live great, authentic leadership, to lead by example and be agents of change.

Gifts in a Crisis

An impactful keynote presentation that will equip audiences to change their perspective and truly step up in times of uncertainty and adversity.

Winston Churchill once said, we should never let a good crisis go to waste!

Life is a choice.  We can choose to be the victims of our circumstances, believing that we cannot change what seems overwhelming.  Or we can choose not to be defined by that which often confounds us.  We can choose to adapt, thrive, learn and lead the change that we are all capable of by seeking out the opportunities.

So what choice will you make? How will you use your influence and privileged position? What leader will you be?

Through her lived experience and powerful story-telling, Rabia takes audiences through these questions to decide for themselves.

Rabia’s most commonly requested keynote relates to her very personal story of battling with discrimination, abuse, chronic illness, and PTSD after her involvement in a hostage crisis in Iraq, and then being written out of history. She explores what it means to display moral courage and lead by example, to stand up for one’s principles in the face of criticism, adversity, and sacrifice, to fight for equality, and to live what she teaches.

.The world is calling upon us to reflect, reset our priorities, to see and fully embrace the realities in front of us - the beautiful and the ugly - and to have the courage to speak up and step up in ways we perhaps never have before.

This is the mark of a great leader and change maker, and great leadership is characterised by those who embody and demonstrate resilience, courage, focus, discipline & authenticity.  It is this type of leadership that we need more than ever right now.

Are you ready to be inspired and empowered to release your inner giant?  To be the change you need to be to impact your own life and the lives of others around you.

Rabia takes audiences through what it means to be a great leader, and how they, too, can lead themselves with courage, integrity and resilience.