Print
Rachael Leahcar is the sweetheart of the first series of The Voice and already has released 3 albums ‘Shooting Star’, ‘Romantique’ and ‘Here Comes the Sun’. 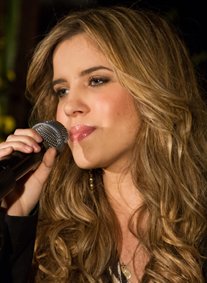 Rachael Leahcar is best known for her breathtaking performances on the first season of The Voice Australia, where all four judges hit the button for the opportunity to coach her. Rachael chose, Delta, her long time idol and finished the competition in 3rd place. Following The Voice, Rachael went on to sing with Bocelli’s orchestra in Italy and went on national tour with Delta Goodrem. She released her debut album ‘Shooting Star’ in July 2012, which has reached Gold status in sales.

R
achael found her love of music at a very early age. This includes singing (able to sing in Italian, French, English and Spanish), playing the piano and the flute. She has performed for many charities, festivals, weddings and other social functions over the years.


Inspired by Eva Cassidy, Adele, Queen, The Beatles and many others, Rachael wants to inspire people in the same way and bring joy and happiness to them through music. Being 90% blind doesn’t stop Rachael following her dreams and she wants to show everyone that she is capable of doing anything she wants in life. She wants to be known as a singer, not the blind girl who sings, and ironically, The Voice blind auditions have given her that opportunity.

After the release of her second album ‘Romantique’, released in April 2013 and debuting in the Top 10, Rachael has continued her passion for music with performances all around the country. Rachael sang at Vision Australia’s Carols By Candlelight for the second year in a row in 2013 and in her spare time continues her support as an ambassador for The Royal Blind Society.


2014 is off to a flying start for the 20 year old singer, with the release of her third concept album, consisting of Beatles covers' titled 'Here Comes the Sun'. Whilst the recording process was relatively fast and very hard work for Rachael, the results are some of her best work yet. Rachael says, "The Beatles have always been a huge musical influence. They taught me to 'imagine' a better world and instilled in me important values. They've shown me the impact music can have and it is my honor to present my take on some of their classics. So 'don't let me down' and have a listen to something special to me".


'Here Comes the Sun' charted at No.1 on the ARIA Crossover charts and is winning even more hearts for Australia's sweetheart Rachael Leahcar.