Print
Radek Sali has been an integral part of the Swisse story since he joined the company in 2005 and having assumed the role of CEO in 2008, Radek has ensured Swisse is now one of Australia’s most recognisable and fastest growing companies by leading the business to one of the largest private transactions in Australia. 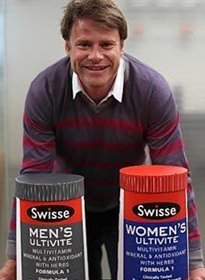 Down to earth, and knows how to connect with the everyday person.

Radek was a guest at our annual Business Retreat-titled the NEW & The Next. Held in Port Douglas, the theme this year was focused on how to build your brand. Radek shared his journey at Swisse Wellness with over 100 of our clients and guests-all high performing business owners and entrepreneurs. Listening to Radek, it was easy to understand what has led him to the success he has had as the CEO of one of Australia’s most successful companies. His presentation was the perfect mix of warmth, wit and wisdom, a refreshing change to the traditional speakers at similar events. His vision for company culture was thought provoking and inspiring. I can see why he has lead Swisse to become the Australian success story that is has. In a post event survey, our guests rated Radek as one of the most popular speakers. I would recommend Radek to any company that is looking to lead their field and challenge the norm in their own organisation. Absolutely brilliant.

Radek Sali has been an integral part of the Swisse story since he joined the company in 2005 and having assumed the role of CEO in 2008, Radek has ensured Swisse is now one of Australia’s most recognisable and fastest growing companies by leading the business to one of the largest private transactions in Australia.

Swisse is a leading Australian wellness brand that prides itself on delivering premium quality natural health and wellbeing products.  Radek and the Swisse team are passionate about living the 4Ps, where People, Principles and Passion come before Profit. Radek has led the brand to successfully expand from VHMS into a skin care, super foods and performance nutrition range of products and together with his team, he is continually seeking to explore new areas of product development and innovation. He has also successfully driven the brand to be the number 1 health product for on line sales in China, become the number 3 brand in New Zealand after 24 months and has initiated one of Australia’s largest ever licensing deals with PGT. PGT will launch Swisse in over 30 countries over the next 3 years across Europe and Asia.

Swisse’s market-leading position and success was recognised in 2012 when Radek led Swisse to be named the ‘Most Successful Business of the Year’ in the prestigious 2012 BRW Private Business Awards.  Radek was also recognised as the GQ Businessman of the Year and the CEO Magazine’s Pharmaceutical Executive of the Year in 2012, these accolades were in addition to a number of health industry awards presented to Swisse in the same year. Swisse was named in the top 25 best places to work in 2015 and 2016 and was nominated as a national finalist in the 54th Australian Export Awards in 2016. Radek was named as a national finalist in 2016 for the Ernst & Young Entrepreneur of the Year Awards.

In addition to his role as Swisse CEO, Radek is the Executive Chairman of Light Warrior Group, a principle driven investment group focused on the potential of business to have a positive impact on the world by creating value for all stakeholders; customers, employees, suppliers, investors, society and the environment. Radek has also founded the Lightfolk Foundation, which has been established to support initiatives with the intent of advancing humankind.  It is through this foundation that Lightfolk ltd has been established, a not-for-profit school of wisdom of which Radek is Chairman, Radek is Honorary Alumni at La Trobe University, Chairman of Noisy Beast, a full-service advertising agency and is an Advisory Board Member for not for profit, the National Institute of Integrative Medicine.

Challenge yourself to be an elite executive

Learning most from failure