Print
Rex Pemberton is a leader in the science of Peak Performance. His speaking experience spans 15 years, multiple cultures and all 7 continents. Whether you're rolling out a new culture initiative, developing your leaders, or seeking a thought-provoking, engaging and relevant keynote address for your group, Rex can help. 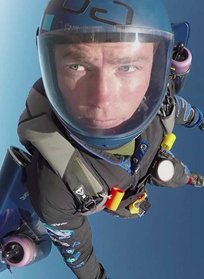 “Rex is a remarkable man and his achievement in climbing Mt Everest speaks for itself. His stories of preparation, determination and overcoming the significant challenges en-route to ultimate victory are captivating and extremely motivational.

“Thank you for your facilitation help creating the vision. Without your ideas and process we would not have built as compelling a vision, nor the grass roots support for it. It is truly what is keeping the function focused and on track during tough times”.

“This visually impressive keynote is one of the best we've ever seen. Thousands of people could talk to us about values and teamwork, but you actually show us and let us experience it for ourselves. The response has been very positive, the participants immediately applying the learning on an individual and team level."

“Rex? Simply Exceptional. The best keynote I have ever attended.”

Rex Pemberton is a leader in the science of Peak Performance. His speaking experience spans 15 years, multiple cultures and all 7 continents. Whether you're rolling out a new culture initiative, developing your leaders, or seeking a thought-provoking, engaging and relevant keynote address for your group, Rex can help.

Rex leverages his own lessons of personal leadership as an exceptional adventurer to deliver inspiring keynotes that engage participants on both a rational and emotional level.

At the age of 21 Rex reached the summit of Mt Everest, making him one of the youngest people, and the youngest Australian, to achieve the feat. He used this experience to lay the foundation for completing the Seven Summits – climbing the highest mountain on every continent. He is now building a jet-powered wingsuit and evolving human flight as we know it today!

Rex has been the recipient of the Adventurer of The Year Award twice and his successes have been featured on CBS, Sunday morning, 60 minutes, Outside Magazine, Outside Television and Australian Geographic.

Rex is one of few people in the world to reach the peak of their sport in multiple disciplines, not just one. He holds multiple world records across a wide platform of extreme sports, from mountain climbing to base-jumping and wingsuit flying. He evolves continuously, setting stretched targets, leading high performance teams, balancing risk with reward and constantly innovating to stay ahead of the competition.

As one of the worlds best adventure speakers, Rex will engage and inspire your audience.

The Evolve keynote focuses on 6 key messages that can apply to any business, team or individual:

-The importance of a clear and compelling vision

- How to build trust quickly

- Creating and maintaining a powerful culture

- Identifying complex layers of risk and redefining it

- Innovation to stay ahead of the competition

At the age of 21, Rex made history by becoming the youngest Australian to climb Mt Everest. He then went on to climb the highest mountain on each of the seven continents, the famous 7 summits.

Evolve Part 2 – From the mountains to the sky

The next chapter of Rex’s evolution occurred high above the clouds, as he took up skydiving, and then transitioned to wingsuit flying. Transforming from being an expert in one sport to a beginner in another is a significant challenge. Despite the odds, Rex rose to the top of the wingsuit world and now competes at the world championships. The keys to Rex’s success were his passion, his intense focus and being very particular about managing risk.

In such a competitive landscape it’s hard to differentiate, so Rex knew he had to evolve and think outside the box.

As a result Rex put together a team to create something completely unique. Alongside a team of dedicated innovators Rex designed, built and tested a jet powered wingsuit.

The X-Wing is a one of a kind carbon fiber wingsuit powered by four turbine jet engines. The wing allows Rex to sustain flight just like an aircraft. Rex and his team are now at the cutting edge of human flight technology and are continually evolving into the future.