Print
Born and bred in Merredin, Rick Hart has become a prominenent figure in Perth, heading up the retail icon Rick Hart for 34 years before exiting in 2009. He also occupied the role as President of the Fremantle Football Club for 8 years from... 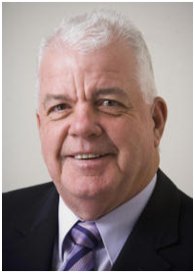 Comments from the audience on the day included... "very interesting", "motivation on overcoming challenges", "great motivator", "great speech" and "most interesting to hear Rick's story, very personable and very credible".

Born and bred in Merredin, Rick Hart has become a prominenent figure in Perth, heading up the retail icon Rick Hart for 34 years before exiting in 2009.  He also occupied the role as President of the Fremantle Football Club for 8 years from 2002 – 2009.

But Rick’s business empire did not come easily, there was considerable hard work to get started and in later years to ensure the business held its own ground against the increasingly competitive electrical appliance industry. Rick Hart has given us an opportunity to gain an insight into the man behind the name, and what has transpired over the last 30 years to bring his business to be the successful brand it is today.

In October 1975, when Rick and a business partner obtained a tip that an insurance company was holding a container of about 100 fridges that had been damaged on board a ship. They put in a tender to buy the fridges, advertised them in the classifieds and sold them from the front of a panel beating shop in Osborne Park. All sold fairly quickly.

In 1975, colour televisions had recently entered the market, making electrical stores even more popular. The business began to do well which Rick credits to advertising. “We had to take risks and advertise because Osborne Park was not a retail area back then” says Rick. In 1980, Rick secured warehouse premises in Osborne Park opening his second ‘Rick Hart Discounts’ store and introduced the ‘warehouse direct’ concept. At this point he started to specialise in ceiling fans. “There was a definite market, as we got a hold of some $29 fans and couldn’t keep up with the demand.

From there, he ended up with 5 ‘Fans and Lighting’ stores and the beginning of the ‘Rick Hart Fan Club’.” Meanwhile, cooking appliances and refrigeration had been introduced into the business. Rick decided to make kitchen appliances his niche market. Today, Rick Hart Superstores boasts Western Australia’s largest kitchen appliance displays, providing consumers with the biggest and best range of kitchen appliances, supported by a highly trained sales team. In the year 2000, Rick Hart made a prominent entry into the audio visual market with the opening of Rick Hart Hi-Fi Corporation in Belmont. Amazingly, the launch attracted an estimated 15,000 people. The Rick Hart chain has continued to grow its business and consolidate its position as one of Western Australia’s major retailers.

Rick Hart Discounts has grown from strength to strength and today employs around 250 people. The Group consists of 10 company owned Rick Hart stores plus 3 franchises, 4 seconds outlets which trade as Rick Hart Seconds. With the recent merger between Rick Hart and eastern states electrical retailer Clive Peeters, the Group enters another exciting phase and period of further growth. Rick Hart says “the merger with Clive Peeters provides many benefits to our customers through access to more suppliers and an expanded product range. The merger also offers improved buying power, modern information systems and financial support that will aid future development”.