Print
Post his playing career, Bob Murphy is still involved with the Bulldogs and has also cemented himself as a high class media performer. A part of the Fox Footy team, Murphy regularly appears on AFL 360 and hosts his own show ‘Bob’ meeting with some of his favourite celebrities in the own environment where they share their favourite sporting anecdotes and passions. 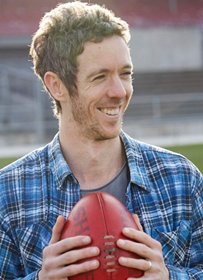 An elite rebounding defender with silky skills, Rob (more widely recognised as Bob) became a legend of the game and the Western Bulldog Football Club through his versatility, leadership and dedication over his 312 game career.

Drafted at pick 13 in the 1999 National Draft, Murphy’s career had a steady start with his first game for the club coming in Round 19 of 2000 against the Carlton Football Club. From here Murphy continued to bloom, earning his first AFL Rising Star nomination the following year in Round 19, 2001. Later that season, Murphy was also awarded as the Western Bulldogs Most Promising Player, in just his 2nd year at the club.

An inclusion in the 2002 & 2003 International Rules series was just the beginning for the next phase in Murphy’s career where he went on to be named the Western Bulldogs Best Team Player in 2003. In the following years Murphy showcased his versatility, originally identifying as a defender Murphy changed up his position under a new coach and cemented himself as a small centre half forward for the Bulldogs in 2005.

The next few years were unfortunately hindered by injuries, but in 2010 Murphy was back to his best and ready to catapult himself into some career best form. The following year Murphy was handed his first inclusion in the All Australian side (following an earlier nomination in 2008) and finished Runner Up in Western Bulldog’s Best & Fairest.

Over the next few seasons, Murphy continued to lead his club with class, which didn’t go unnoticed – in 2015 Murphy was not only named AFLPA Captain of the year by his peers in his inaugural year as captain for the Western Bulldogs, but also selected and nominated as Captain of the All-Australian side of 2015, becoming the first ever player to have collected both honours in the same season. The year was capped off for Murphy with another Runner Up finish in the Bulldogs Best & Fairest.

2016 was a year filled with utter heartbreak and total elation. Murphy sustained a season-ending ACL injury in April, unbeknown to him at the time, his team would go on to win a drought breaking premiership in September that year. Murphy always the leader, showed his class throughout, earning him a place in the heart of not just the Bulldogs faithful, but footy fans across the country.

Rob returned to playing in 2017, with his final game in round 23 of the Home & Away season. Murphy’s unique character and dedication throughout his 17 year career earned him the unofficial title of the heart & soul of the Western Bulldogs.

Post his playing career, Murphy is still involved with the Bulldogs and has also cemented himself as a high class media performer. A part of the Fox Footy team, Murphy regularly appears on AFL 360 and hosts his own show ‘Bob’ meeting with some of his favourite celebrities in the own environment where they share their favourite sporting anecdotes and passions. Furthermore, Rob also writes for The Age and a now regular fixture on the sound waves at SEN co-hosting ‘Bob & Andy’ with Andy Maher weekdays from 3pm-6pm.

Bob’s passion and skill for writing saw him recently publish his is unique memoir; Leather Soul, which takes the reader inside his seventeen-year career, exploring the people, places and events that shaped him. From playing backyard cricket in 1980s Warragul to Community Cup with Paul Kelly in the 2000s and from the joy of marrying his high school crush to the agony of a season-ending ACL rupture. A truely unique character, the book explores how the country kid with a gypsy’s heart become an All-Australian captain and what’s it like to have your club reach the AFL Grand Final for the first time in sixty-two years, and have to cheer from the sidelines.

The father of three continues to stand out as a one of the AFL’s most memorable and unique characters and has never been a typical footballer. A music buff, Age columnist and Winnebago driver, Bob is as comfortable in a Fitzroy café or the front bar of a grungy pub as he is in the locker room.

Leather Soul – A half back flankers rhythm and blues